A combination attack that guarantees a critical hit.
[view]
The Triangle Attack is a move that debuted in Fire Emblem: Shadow Dragon and the Blade of Light and was made famous by the Whitewings sisters.

After its appearance in Fire Emblem: Shadow Dragon and the Blade of Light, it has later appeared in subsequent games. The move involves three specific units who perform a coordinated strike on an enemy, dealing massive damage. It is aptly named due to the triangle placement of the three units around their target.

This move is most commonly associated with the Pegasus Knight class as the original three who used this move were the Whitewings sisters, Palla, Catria, and Est. Many trios of Pegasus Knights have also been able to execute this special move after Shadow Dragon and the Blade of Light. At least four different trios have been able to perform this tactic despite not being Pegasus Knights, such as Bors, Gwendolyn, and Barthe from Fire Emblem: The Binding Blade, who are all Knights.

To perform the move, the three units must surround a single enemy by placing all three applicable units adjacent to the target on different sides. When the player chooses to attack with them in this formation, a special attack is executed at the start of the battle where the attacking unit calls out to their allies to strike the enemy at the same time. The resulting attack deals three times the normal damage of the initiating unit, similar to a Critical Hit. While the damage dealt is great, the amount of preparation needed to execute the move makes it somewhat impractical and forces the player to utilize all three sisters, decreasing the amount of unit variety on the field. It also does not occur during the enemy's turn, even if the enemy is placed in the same target location for a Triangle Attack.

In Fire Emblem Echoes: Shadows of Valentia, Triangle Attack is the personal skill of the Whitewing sisters. The move can only be executed if all three are in a Pegasus Knight and/or promotion. Reclassing any and all of them out of the class line through a Pitchfork removes their ability to execute the move. Costing 10 HP of the starting unit to activate, it is significantly less powerful than in prior games, only boosting the user's critical rate instead of guaranteeing a critical hit. It also increases the unit's attack power and hit rate for the duration of the attack, but like most combat arts, it is impossible to double-attack with it. Notably, a single-rider variant of the maneuver debuted in Fire Emblem Echoes: Shadows of Valentia, named Solo Triangle Attack.

In Fire Emblem: Three Houses, Triangle Attack is a Combat Art that is learned by mastering the Pegasus Knight class, as such, it can be learned by any female character and Male Byleth via New Game+. To perform the move three flying ally units, including the user, have to be adjacent to an enemy.

In Fire Emblem Warriors, during Caeda and Cordelia's support, Cordelia makes mention of the move to Caeda and expresses a desire to perform the move. While Caeda is interested, she is not too sure without having practiced the move herself. The two decide to try and ask Hinoka to attempt the formation later. Caeda's Warrior Special executes this move by summoning two spirit clones of herself. As a small easter egg, if Caeda, Cordelia, and Hinoka all have achieved an A+ support with each other and all three are deployed on the same map, Caeda will instead call upon Hinoka and Cordelia to execute the move in traditional fashion.

Even with the Reclassing system introduced since Shadow Dragon, the three sisters are still qualified to perform a Triangle Attack, no matter what class each of them is assigned, as long as they are all adjacent to their target. The only combination of classes that prevents them from using Triangle Attack is if all three characters are Archers/Hunters/Snipers, as it prevents them from attacking at range of 1.

It is also worth noting that since the Triangle Attack is not considered to be a critical hit, it can bypass the effect of the "Dazzle" card in WiFi battles.

The attack can be performed by any of the three participants, from any side, as long as all three of them are surrounding the target enemy. The formation of a Triangle Attack usually is as follows:

In the case of the three brothers, Boyd, Oscar and Rolf from Path of Radiance, bows are used instead of short-range weapons, therefore each of the participants needs to be one square away from the target.

Animation of the Triangle Attack in Fire Emblem: Shadow Dragon and the Blade of Light. 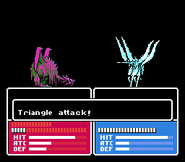 Est prepares a Triangle Attack on a Draco Zombie in Fire Emblem Gaiden.

Animation of the Triangle Attack in Fire Emblem: Mystery of the Emblem. 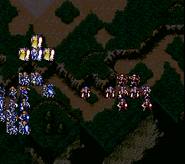 The Pre-Battle Animation of a Triangle Attack by Meng, Maybell, and Bleg in Fire Emblem: Genealogy of the Holy War

Vampa preparing to attack Tine in Genealogy of the Holy War.

Animation of Bors using the Triangle Attack in Binding Blade.

A triangle attack, with Florina initiating the battle.

Tana preparing to strike with Vanessa and Syrene in The Sacred Stones.

Triangle Attack in The Sacred Stones

Boyd preparing to strike with Oscar and Rolf in Radiant Dawn.

Catria preparing to strike with Palla and Est in New Mystery of the Emblem.

Triangle Attack in action in New Mystery of the Emblem.