Free Knight
[view]
“Where the hell do you get off!? Okay, I'll fight you... only to shut you up! You ready?”
—Tristan to Dalvin

Tristan is a playable character from Fire Emblem: Genealogy of the Holy War. He is the substitute character of Diarmuid if Lachesis was not paired up. He is the brother of Jeanne.

He also shares a conversation with Dalvin in Chapter 7, after Melgen is captured.

Tristan's father was Eve, one of the Agustrian knights assigned to protect Lachesis. Both he and Jeanne were eventually taken in by Sigurd's army. However, the two of them were separated some time later. Tristan was raised in Isaach along with Seliph and the younger initial members of the Liberation Army, while Jeanne was adopted by a traveling merchant, who took her to Leonster. After Jeanne's adoptive father was murdered by the Grannvale Empire, she was raised in hiding by Finn alongside Leif. Tristan and Jeanne are finally reunited in Chapter 7 and they vow never to be separated again.

Tristan is shown to be dutiful and loyal, having the utmost respect for Oifey and obediently following his orders like an ideal knight. He's also shown to display a great deal of concern for his fellow troops, reminding Deimne that they should hurry just in case Muirne is in danger.

Tristan is a man with a strong sense of honour, fighting for what he believes is true and just. He's also an incredibly hard worker, always striving to do what's best for the army and becoming disturbed in a conversation with Dalvin if he's below a certain level, because he feels as though he hasn't contributed enough.

His unique conversation with Dalvin also suggests that he feels some insecurity in himself, as he wishes to be an archetypal strong and stalwart knight, but is ultimately conscious that he isn't skilled enough to contribute as much as the other army members who bear holy blood.

As with most substitute units, Tristan is unable to match up with Diarmuid's potential. Diarmuid's growths will, across the board, far surpass Tristan's no matter who his father is. Even if Diarmuid inherits no skills from his father, he will still likely wind up more useful than Tristan due to his Charm skill. With a good father, Diarmuid will turn out vastly superior.

When compared to other substitute characters, Tristan starts out quite poorly. Although he possesses excellent base stats for a level 3 unit, his lack of Pursuit and decent weaponry will make it extremely difficult for him to deal damage early on, as his chance of activating his Critical skill is very low at first. This means that Tristan will need to steal kills, as he will have a hard time defeating even Axe wielding units on his own due to his poor offense. Unfortunately, Tristan is unlikely to improve much until he promotes as his lack of skills only allow him one swing at an enemy, and his growths, while being high overall for a replacement unit, are stacked heavily toward HP and are otherwise mediocre or poor. After Promotion, Tristan's usability rises substantially. His Skill will nearly cap which will allow his Critical skill to activate much more frequently. His Speed will rise considerably, and he will gain the Adept skill which he desperately needs to improve his offense.

Tristan will ultimately wind up being one of your tougher units due to his strong base stats and high HP growth, but even after Promotion he will struggle to offensively keep up with your units that have Pursuit as both Adept and Critical are unreliable.

In Chapter 7, if Tristan speaks to Jeanne, she will gain one point of luck.

Tristan is illustrated in the trading card game with the following cards: 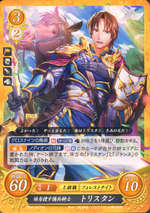 Tristan was one of the Knights of the Round Table in Arthurian mythology.

Official artwork of Tristan from the Super Tactics Book.

Tristan, as he appears in the first series of the TCG as a Level 1 Free Knight.

Tristan, as he appears in the second series of the TCG as a Level 10 Free Knight.

Tristan, as he appears in the third series of the TCG as a Level 20 Ranger.

Tristan, as a Ranger in Fire Emblem 0 (Cipher).

Tristan as a Free Knight in Genealogy of the Holy War.