The Troubadour (トルバトール Torubadōru) is a horse-mounted support magical class that recurrently appears across the Fire Emblem Series, beginning from Fire Emblem: Genealogy of the Holy War. Troubadours are primarily armed with staves that they utilize for healing and other support purposes. Originally granted the ability to brandish Swords for self-defense, beginning from Fire Emblem: The Binding Blade, they are no longer able to do so. They are akin to a mounted version of the Priest and Cleric classes, and are therefore treated as cavalry units.

In their original inception in Genealogy of the Holy War and Thracia 776, Troubadours are armed with both Swords and Staves. They promote into Paladins in these two iterations.

In TearRing Saga: Utna Heroes Saga, the Troubadour class is unable to promote, and the only playable member of this class is Mel.

Beginning from The Binding Blade, Troubadours lose the ability to arm Swords and instead wield Staves exclusively for support purposes. This title is credited for instituting the Valkyrie class as the primary promoted form of the Troubadour class.

In The Sacred Stones, Troubadours are further given the option to promote into Mage Knights alongside Valkyries.

Absent from Path of Radiance to New Mystery of the Emblem (although Mist can promote from Cleric to Valkyrie), Troubadours formally return to the series in Awakening, where they are further given the option to promote into War Clerics alongside Valkyries.

In Fates, the Troubadour class is known as Rod Knight (ロッドナイト Roddo naito) in the Japanese version and is unisex for the first time in the series. It is treated as a Nohrian class, and is given the new option to promote into the Maid and Butler (depending on gender) classes.

In Fire Emblem Warriors, the class returns as the base class of Elise. In this incarnation, Troubadours can wield Tomes; the class acts as a clone of Dark Knight.

In Vestaria Saga I, the Troubadour is known as the Thaumaturge. It is a standalone class that wields Staves and Bows.

Due to the fact that Troubadours have high Movement, they are thus able to reach injured allies and replenish their HP before quickly retreating from the front-lines with ease. In this regard, they are in some ways superior version of the standard Priests and Clerics. Their usefulness is further amplified by their adequacy in Magic, Speed and Luck, all of which are instrumental to ensuring the effectiveness of their healing magic and their ability to dodge hostile enemy attacks while aiding their allies. Troubadours are, however, weak in the HP and Defense departments, and it is therefore prudent to ensure that they are accompanied by able bodyguards at all times. Their magic cap is slightly lower than those of clerics, meaning that they are somewhat less potent as healers.

Throughout the series, playable Troubadours have all been depicted as some sort of nobility or royalty. Because of this, they are often wearing clothes that their station can afford, usually being fancy and elegant in appearance but not necessarily wearing anything "battle-ready" like regular uniforms. For the first five games Troubadours appear in this comes in the form of a knee-length dress, high-heel boots and a small or normal size cloak. In Genealogy of the Holy War, the battle sprites also wield a shield and a small breastplate and a pair pauldons with a more elegant look than that of regular soldiers. Also in this game and The Blazing Blade generic units and playable Troubadours Nanna and Priscilla wear a headband with wings, similar to the ones Cordelia and Caeldori wear in their respective games.

Like with a lot of other classes that reappeared in Awakening, the Troubadour's costume received a massive overhaul with the arrival of Yusuke Kozaki. When he was hired to illustrate and design Awakening and Fates he refurbished most of the game's design and thus, the Troubadour's costume was drastically altered as well. While still keeping an elegant look about them, Troubadours now wore clothes that are more capable of being worn into battle, as they now wear a woman's frilled shirt, a corset matching the uniform's colour (blue for generic, but pink for Maribelle), and brown leather high-heel boots. This also applies to Fates, albeit focusing on a more battle-ready look than a fancy one which is especially the case with male versions of the uniform; upon closer inspection, the base uniform worn by the troubadour class is also shared with the Ballistician, the Bow Knight, the Dark Falcon, the Lancer, and their quintessential advanced line the Strategist, albeit with it's own unique decor. Elise's unique model depicts her wearing a royal dress, gloves and boots meant for a child. When she promotes to the Strategist class, she gains a more battle-ready look, as she gains small pieces of gold armour to wear in order to protect herself (which is ironic considering her poor Defense).

Genealogy of the Holy War/Thracia 776

Concept artwork of the Troubadour

Concept artwork of the Troubadour and Bard classes

Battle model of Ethlyn, a Troubadour

Staff animation of Priscilla, a Troubadour

Map sprite of the Troubadour

Concept artwork of the Troubadour 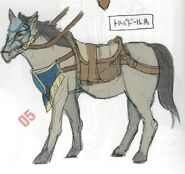 Concept artwork of the Troubadour mount 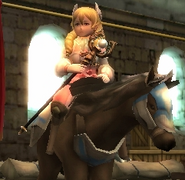 Battle model of Maribelle, a Troubadour

Concept art of a male Troubadour

Concept art of a Female Troubadour 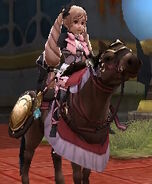 Battle model of Mel, a Troubadour