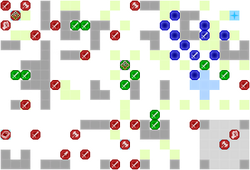 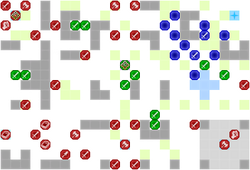 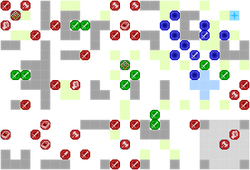 Byleth, Felix and 9 others

True Chivalry/Script
[view]
“Safety for the people of the Kingdom has been a growing concern, and Fraldarius territory is no exception. Felix has been called upon to help restore order back home.”
—Opening Narration

Felix approaches Byleth with a favor to ask. Felix's father Rodrigue, the Duke of Fraldarius, has asked Felix to help solve a bandit problem back in Fraldarius territory, since this has become increasingly problematic as of the Tragedy of Duscur. Felix wants Byleth to come along mostly to see them in action away from the training ground; he also wants Byleth to recruit more fighters to help, promising to meet them there.

On Maddening, Heroes will start to appear every other turn if the strongholds are not taken quickly.

If all townspeople are saved:

If 3-4 townspeople are saved:

If 1-2 townspeople are saved:

You Lose If: Rodrigue or Felix Dies

Rodrigue is immobile to start but begins moving if any player unit stops within three spaces of him. If this occurs, he will actively pursue and attack the enemy, but because he peculiarly stays at level 15 even on higher difficulty modes unlike most other green ally units, he is liable to be outmatched and killed, especially on Maddening where he can be immediately mobbed and killed if not saved quickly. It's recommended to avoid getting too close to him to prevent him from moving around in the first place, but if it is unavoidable it can help to have at least one solid flier to follow him around and make sure he has backup, or a healer with Physic or Rescue that can pull him out of trouble.

With how spread out the map (and the villagers, who will come under attack turn one) is, it's also convenient to bring your higher movement units, whether cavalry or flying ones.

There are villagers spread across the map located in the west, northwest, and middle of the map as well as one standing by your starting position. If you send half or so of your units left (per the map) towards the top corner stronghold and the villagers near it, they should be able to go straight from there to the group of villagers that is at the middle left of the map. The central villagers are near two more strongholds, each of which summons reinforcements if the stronghold unit is not the first you take out. The mage in the lower left is guarding the exit tile for the villagers and must be defeated to allow them to escape, but if you defeat the boss before all villagers have escaped, you will get credit as well, so it is possible to win by sending a unit across the map to take them down with Stride and Warp.