Tsubasa is an eighteen-year-old (seventeen in the Japanese version) high school student and a childhood friend of Itsuki Aoi. After awakening as a Mirage Master, she forms a sisterly bond with Caeda. She joins Fortuna Entertainment in the hopes of becoming a singer like her idol Kiria Kurono, and in hopes of finding her missing sister. Her birthday is December 2.

Five years prior to the story, Tsubasa was involved in an incident where her older sister Ayaha Oribe, mysteriously disappeared during a concert she was holding alongside nearly the entire audience and staff on site. Tsubasa was the only survivor. Over the course of five years, Tsubasa developed a dream to become an idol to better understand her sister and perhaps learn the truth behind her mysterious disappearance.

Tsubasa joins Fortuna alongside Itsuki due to her strong Performa levels attracting the attention of Maiko. During Kiria's performance in Shibuya, Mirages lay siege in Shibuya 106, transforming into a labyrinth. Ascending the tower, Tsubasa discovers that Ayaha is alive and is possessed by a malevolent force. On the roof of the tower, they find an Aversa possessed Ayaha and Tsubasa fights her in order to break the mirage's control over her. After successfully driving Aversa out of Ayaha, her sister makes a full recovery and joins Fortuna as an employee. Tsubasa is overjoyed with their reunion and redoubles her efforts so she can focus on her idol debut.

Head Over Heels for Her

Tsubasa makes her official debut as an idol by releasing her first single Feel, drawing the attention of her classmates and many publishing companies. Her very first job is a model, a task she is apprehensive, but with encouragement from Itsuki, she devotes her all to the job. Unfortunately, her first job ends with her frustrating the photographer Nobu Horinozawa due to her inexperience and nervousness. Shortly after, Shibuya is affected by another Idolasphere. Horinozawa in turn is revealed to be the one who created it due to being possessed by Gangrel. To make matters worse, Nobu kidnaps Maiko as it is revealed that the two used to be a famous photographer/model duo several years ago.

After making it through the Idolasphere and encountering Nobu, Tsubasa fails once more to impress Nobu and the Mirage Masters are warped out of the Idolasphere. Despite the effect of the Idolasphere, a small group of citizens are normal due to Yashiro Tsurugi's latest concert. Realizing that Tsubasa lacks the ability to express themselves, they return to their office to improve Tsubasa's confidence. Yatsufusa, who has returned to normal, visits the office to speak to Maiko where they learn of the Maiko and Nobu's modeling books called "My Complex". Tsubasa decides to use the book as a reference and enlists Itsuki's help to give her more natural poses that suits her. With a bit of adjustments, they manage to make a suitable pose and present it to Nobu once more. Her newfound confidence and relaxed state inspires him to take her photo and also draws Gangrel out of him after Nobu realizes that Gangrel will never understand the art of photography. Tsubasa and the rest use the opportunity to fight and defeat Gangrel. With Gangrel's grip over Maiko dispelled, Tsubasa thanks Maiko for giving her the inspiration needed to be a proper model.

Tsubasa is able to successfully perform in her first real photoshoot with Nobu alongside Maiko and a new girl. Though happy with her success, even getting a compliment from Kiria, the new attack on Shibuya greatly worry the company. The company figures that the attacks must be plotted by a Mirage possessing someone powerful and influential in the entertainment industry. Luckily, another Fortuna Mirage Master returns to the industry to help. The new girl from earlier, Eleonora Yumizuru.

Tsubasa gains traction in the idol industry, landing a role as Sneeze Detective Maho directed by notorious director Kuen Tarachino. Unfortunately, her acting skills are amateurish, frustrating Tarachino. As she is chewed out by Tarachino, Daitama Studio is suddenly besieged by Mirages lead by an Excellus possessed Tarachino. As the Mirage Masters attempt to break through to Kuen, they help Tsubasa develop acting skills; learning to act with gusto from Touma, pouring in emotion with Eleanora, and finally performing a kiss scene with Itsuki. Tsubasa rapid progress impresses Tarachino enough to expel Excellus from him, leading to a fight. To make matters worse, Yashiro appears and fights alongside Excellus simply to test the Mirage Master's skills. The duo is defeated and Daitama Studios returns to normal. The show completes its filming and in prescreening shows, Tsubasa's performance as Maho garners immediate acclaim. As one final surprise, Maiko reveals that Yashiro has joined Fortuna Entertainment, having acknowledged the skills of the Mirage Masters.

Tsubasa's Side story revolves around her adjusting to the entertainment industry starting with her first meet-and-greet event where she has the shake hands with fans. Itsuki tries to help her practice, but she ends up flustered even when Itsuki modestly says hello. In order to help her gain confidence, Tsubasa first takes on a job handing out invitations to her meet-and-greet. Tsubasa slowly improves over the course of her handouts and even runs out. Tsubasa is excited to realize that she was so busy caught up in the moment of interacting with others that she completely forgot about her social anxiety. Her Meet-and-Greet goes off without a hitch.

Sometime afterwards, Tsubasa receives a new gig as the 15th Amrita Girl, the female model for Amrita Shower drink. However, the director of the commercial feels that she lacks "devilish charm", the ability to tantalize an audience. Touma tells her that she is looking for the ability to give what the customers want from her, without giving it completely away. Tsubasa decides that the traits he suggesting is similar to a cat named Little Devil. Tracking down the cat to an alley, she attempts to play with it, even getting Little Devil to roll on its back. However, when she goes to pet it, Little Devil hisses at her. Tsubasa plays with the cat, drawing the crowd by her meowing with the cat, but she completely drowns them out with her roleplay. Kiria even witnesses her, stating that despite Tsubasa's ridiculous idea, believes that she has potential and even inspires her to improve. Her training with the cat gives her an epiphany of devilish charms and her commercial airs with widespread positivity.

Tsubasa's rising popularity has convinced Maiko to plan a solo concert for Tsubasa. Though reluctant, Maiko assures her that her performance up until that point has garnered her not only a lot of fans, but also gave her the skills to pull it off. To clinch the show, Maiko hired Chouten Sawafuji, a platinum-hit songwriter, to create a new song for Tsubasa. Unfortunately during their meeting, Sawafuji immediately declines the offer, still affected by the death of Azusa Maekawa, a legendary idol who died the previous year from a Mirage attack. Kiria previously fought the Mirage, Pheros, and managed to weaken it, but she was unable to finish it, forcing it to retreat. Hearing of Sawafuji's scheduled appearance at Daitou TV, the Mirage Masters enter the Idolasphere there where Pheros has reappeared, now back at full strength. Just her presence alone overwhelms Tsubasa, but Itsuki encourages her, stating that she will become a new legend. Tsuba sings Feel and counters Pheros, leading to a fight. Tsubasa and the others are able to defeat Pheros, putting Azusa to rest.

Sawafuji is touched by her spirit and decides to write her new song; Fly: You're My Wind. Forming her performa with Caeda, the two fortify their bond to fight alongside each other. Tsubasa's solo concert is a smash hit with Sawafuji praising her performance, declaring that she is Azusa's successor and that he would love to write another song for her. Tsubasa thanks Itsuki for his support, but Itsuki admits that it is due to her hard work that she has gotten this far. Nonetheless, Tsubasa asks for Itsuki to continue supporting her as she has become a Sacred Idol.

Tsubasa is an optimistic and kind individual. She frequently seeks to better herself, even though her methods to improve herself can be abnormal or unusual in certain cases. She is friendly to those she has become close to and is polite when talking to others. She shares a close bond with her parents and especially her older sister Ayaha. Much of her earlier motivations came from her desire to find her sister and after their reunion, Tsubasa greatly treasures the time she spends with her sister to recover lost time.

By her own words, Tsubasa suffers from social anxiety and has trouble interacting with new people. She also lacks self-confidence, usually feeling uncomfortable in new situations, especially ones that she feels is embarrassing. She is a little clumsy, stutters and stumbles on words when nervous or flustered, and often thinks out loud.

She has been friends with Itsuki since childhood and has a crush on him, but has yet to admit her feelings. She looks forward to working with him both as a Mirage Master and as an idol. She usually comes to him for advice and input on new situations and greatly values praise coming from him.

She is an avid fan of Kiria Kurono, even expressing excitement that she's breathing the same air that Kiria does when she first arrives at Fortuna Entertainment. However, Tsubasa can barely handle talking to her, let alone being praised.

Since forming a bond with Caeda, the two have become almost like sisters. While Caeda expresses some concern with her clumsiness, she is eager to see Tsubasa grow and the two rely on each other both in the Idolasphere and in the Bloom Garden.

Madcap Idol
Energetic high schooler and idol, partnered to Caeda. She gives any job her all. Appears in Tokyo Mirage Sessions ♯FE Encore.

With her devilish charm and "Tsubasa's Kiss", Tsubasa wins the public's heart. The catchphrase becomes one of the most trending topics of the year, and she wins an award for Best Commercial. Her acting abilities on Maho were also highly praised, and she wins more and more roles as the days go by...

Thanks to "Fly: You're My Wind," she won various awards starting with Rookie of the Year, and left her name in history as a legendary idol. However, she wasn't satisfied with just that, and continues to work hard during her lessons, aiming for even greater heights.

Tsubasa Oribe is illustrated in the trading card game Fire Emblem Cipher with the following cards: 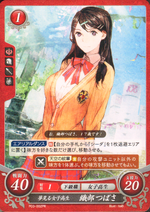 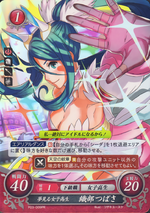 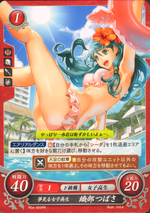 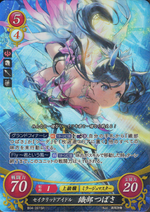 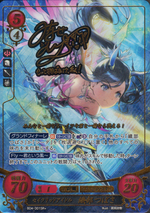 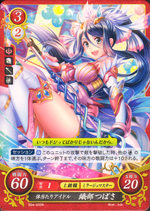 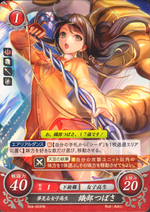 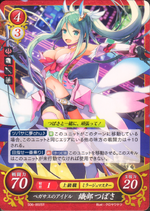 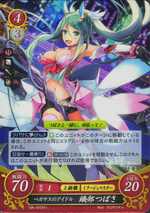 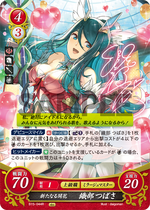 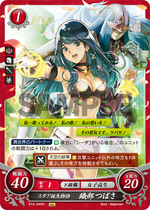 Tsubasa Oribe appears as a Spirit in Super Smash Bros. Ultimate. She uses her school uniform artwork as her default, but can be enhanced into her Carnage Form when maxing out her level.

Her given name "Tsubasa" is the Japanese word for wings, referencing the Pegasus Knight class.