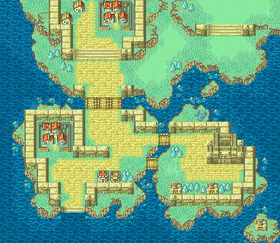 Guard Duessel and survive for 10 turns (or defeat Beran)

Chapter script
[view]
“A former lance instructor to Ephraim, Grado's General Duessel often came to Renais as an emissary of his empire. Despite their stations, the two men share similar dispositions and a warm relationship. Why has Grado started this war? What is the miasma of evil emanating from the country? Ephraim believes that Duessel can answer these questions. It is this belief that propels Ephraim forward into Grado territory.”
—Opening Narration

Turning Traitor is Chapter 10 in Ephraim's route of Fire Emblem: The Sacred Stones.

NOTE: This mission is unusually hard, so using the Tower of Valni for training is recommended.

If you have already promoted most of your units, this mission should be quite easy. If not, you will want to bring your strongest units along, and no one else, otherwise you will risk losing units later into the chapter, such as Turn 7 and after.

Charge all your units towards Duessel except for Tana.

Move Tana towards Cormag and his group, putting her within range of the wyvern rider north-east of Cormag. Ensure that she is sufficiently trained so that she can kill this rider, as Cormag and his group will start moving on turn 5. By the time he starts moving, have Tana speak to Cormag to recruit him. Cormag is strong enough to deal with the cavalry reinforcements that appear near your starting position on turn 6.

Duessel's cavaliers should be able to hold the enemies off to a reasonable effect. All of them have Vulneraries, so they'll heal themselves when given the chance to. The only threat will be the pirates that come from the sea. There are also two "Fleet" units (sea ballistae). They move slowly and are inaccurate, but can deal a lot of damage if they hit. If Tana is strong enough, she should get rid of the north-western fleet, as it drops a Secret Book upon its destruction. If Ross has been promoted into a Pirate/Berserker, he can get rid of the south-eastern fleet.

After securing the area near Duessel, have a unit visit the village nearby for a Hero Crest, before pushing towards Beran. Kill the two cavaliers near him for their items, before clearing out all remaining units near him. Beran is a level 7 Ranger that has a Lancereaver, Longbow and Killer Bow. As he's standing on a gate tile, he will have additional defense and evasion. The fastest way to dispose of him is to attack with an axe user, as the lancereaver is simply effective against lance users; it's weak to axe users. Avoid fighting him at a distance unless your unit has enough defense, as his Killer Bow can cause a casualty if he manages to land a critical hit.

Note: Only kill Beran once you have obtained what you needed - the chapter ends prematurely if he dies before the ten turn limit.