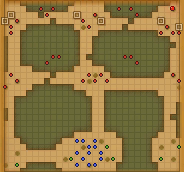 Chapter script
[view]
“No man can stop fate... Death will always have its due, but perhaps it will accept a few substitutions. Come, my dear Minerva. Join me on one final flight...”
—Gerome to Cherche

Twin Wyverns (Sky Riding Wyverns in the Japanese version) is Paralogue 11 of Fire Emblem Awakening and Gerome's paralogue. Gerome must be spoken to by Chrom or Cherche to be recruited. This chapter takes place in Wyvern Valley.

If the Villagers survive the fight, Chrom will be gifted with these items.

This Paralogue is unlocked when Cherche achieves an S-support rank with another character and Chapter 13 has been completed. However, it cannot be accessed due to its location on the world map until the player completes Chapter 17, or Scion of Legend, Wings of Justice, and Ambivalence are unlocked.

If the above has not been achieved, after Chapter 14, only Owain's paralogue is needed to access this map.

Gerome starts off next to your army so recruit him as soon as possible by talking to him with Cherche or Chrom. Once he's in the army, you can begin to complete the map.

The eastern villagers are hard to get to without aerial units while the western one is easier to get to with the bridge in between the islands. For the best and easiest time to protect them, warp them to the central south island with a Rescue staff and have your units protect them by any means necessary. After you can determine it is okay to lessen your defenses, send out a small force, mostly aerial units, to start moving north to clear the rest of the enemies. Focus on taking out the aerial units while moving north to make it easier to stop any reinforcements by leaving only ground enemies to be killed.