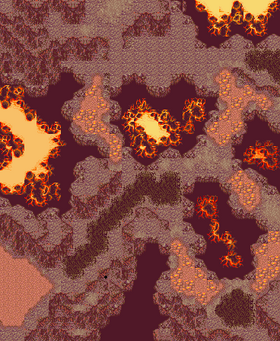 Chapter script
[view]
“The group sets off in search of Grado’s elusive Imperial Prince Lyon. Innes has ordered Frelian troops to aid in the hunt. The troops return with news that Lyon has moved north. The group’s search for Lyon leads them to Mt. Neleras, deep within Darkling Woods. The scorching heat and sulphur stench render the area unfit for human habitation... Endless numbers of gorgon eggs stud the forbidding landscape.”
—Opening Narration

Two Faces of Evil is Chapter 18 of Fire Emblem: The Sacred Stones.

After completing, monsters will attack Nerelas Peak at times.

As always, regardless of boss, there will always be Gorgon Eggs. Fog of War does not occur.

This map introduces two new monster units; Gorgons and the map-unique Gorgon Egg. Gorgons are similar to Arch Mogalls in strength but with slightly higher health and defense at the cost of being ground units. They have two unique dark-type spells; Demon Surge, their standard spell which all of them use. Some Gorgons also come with Stone, a dark spell with 5 uses. While Stone is generally inaccurate, should the spell land, the targeted unit becomes petrified for five turns. Enemies who attack a petrified unit have 100% accuracy regardless of their skill and the target's evasion along with a flat 30% critical hit chance, which often results in death. Restore staves can be used to cancel the effect. Stone's charges will be consumed even if the attack misses, similarly to Shadowshot. Some of the Gorgons will also be equipped with them.

The map is littered with many Gorgon Eggs and tended to by a various small selection of monsters, such as Gorgons, Mogalls, Baels and Gargoyles. Gorgon Eggs are initially dormant until a player unit walks within range of one, upon which the egg will begin to pulse as it restores health. While the eggs have weapons, they cannot attack; rather, it is the Gorgon's weapon should the egg survives and matures. Gorgon Eggs provide plenty of experience regardless of the unit's level or class, making them extremely ideal to level up any units that're lagging behind. Some of these eggs will be in areas inaccessible to ground units, so some fliers are recommended to access them.

Around the middle of the map are cracked tiles will damage any unit that stands on it for 10 HP. These tiles can be used to perform the Enemy Control glitch, and can also be deactivated by a Thief, Rogue, or Assassin by ending their turn on one of them.

As Gorgons are dangerous, it is best to send either a Bishop or Summoner, or both toward the Gorgons. A Summoner will use Phantoms, as monsters always attack Phantoms over any other enemy unit. If one gets damaged, the other will heal them, so make sure to bring a stave to heal each other. Otherwise, send a Berserker or Swordmaster to deal with the Gorgons.