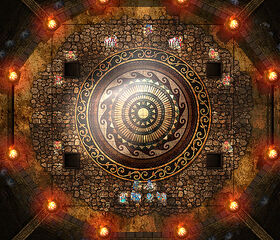 This battle consists of a fairly open arena with four staircases. The chapter is straightforward, and routing the enemy is a matter of moving all enemies into range of your units.

You start out in the bottom corner of the arena, with Marth on the other side. You may be tempted to simply move to the center of the arena, as there is a spot directly in the center where no enemy ranges cross. However, this can cause your units to become surrounded from the enemies on the left and right edges of the arena.

Instead, go ahead and put two strong units (probably Frederick and Chrom paired up with someone with a higher movement like Sully) on each of the bottom two staircases. Let the knights kill themselves trying to beat on these characters. If you use Chrom for this, make sure to equip him with his rapier for this part of the chapter.

The two mages of the level aren't very dangerous, but can be troublesome if they are able to attack more than once on any given character. If you follow the strategy listed above, then the mages shouldn't be able to reach your characters on the first enemy phase. Use this time to kill them off.

The other enemies can be killed however you like. It doesn't really matter what you send after them, as long as you don't send in Lissa or an undertrained Donnel.

Marth is decently strong, and wields a Parallel Falchion. The easiest way to beat Marth is to simply send Frederick after him with either his silver lance or a javelin. If you haven't trained Frederick much, then you might want to pair him up with Sumia for a speed boost.

This is the first chapter where you don't need to use Frederick, who only eats experience. By this point you have access to strength and defense tonic. Use these to compensate for your units' weaknesses. Pair Chrom with Sumia (give her Kellam's javelin), also bring Vaike with a hammer to deal with the Knights (as well as Orsin's hatchet from renown awards, and Virion's Elixir), and Kellam to absorb the massive damage dealt by Marth. Also bring Sully or Stahl to pair with Kellam. Robin should be sufficiently leveled at this point to pair with Vaike.

On the first turn put Chrom/Sumia and Robin/Vaike in the center so that each one can engage one of the fighters. Move the Cavalier/Kellam pair beside Robin/Vaike to provide extra support. After the first turn the two two fighters should be sufficiently weakened to take out. Use Orsin's hatchet to take out the fighter on the right, and Sumia's Javelin to take out the fighter on the left. Next turn the mages will attack, Sumia should have no problem dealing with her mage, Vaike will take damage, use the Elixir to heal him.

Finally use Vaike to take out the Knights, and trade the javelin to Kellam since Sumia will no longer need it. Separate the two remaining fighters, taking out the one on the left with Vaike/Robin and the one on the right with javelin Kellam. Remember that Marth will chase after the closest unit to him, otherwise he will target Chrom. Once the Fighters are disposed of, put Kellam at full health into Marth's attack range (it may help to get Kellam the Elixir) and slowly wear Marth down.