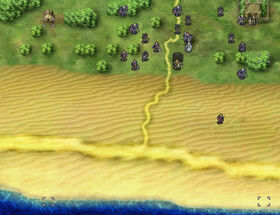 Narsus (had his village visited in Map 3, talk to Runan)

Chapter script
[view]
“Damn, they found us! We need to hold out until we can rendezvous with the rest of our troops!”
—Runan