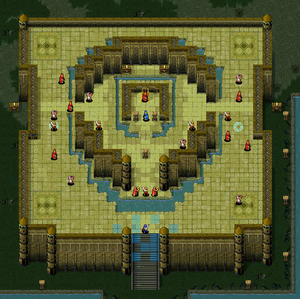 Chapter script
[view]
“Khadein is an independent city-state, taking orders from no foreign nation. The Archmage has many pontifices under him, governing according to their counsel. In the previous war, Pontifex Gharnef allied with Dolhr and dragged Khadein into the war, and the city suffered great damage as a result. As Khadein had lost all of its pontifices, Wendell became its Archmage and started rebuilding the city. However, Wendell left on a journey to fulfill a mission given to him by Gotoh. He then left Khadein in the care of two young men. They were two skilled and promising young mages… Merric and Arlen.”
—Opening Narration, New Mystery of The Emblem
“Khadein is a free city. It is not under the rule of any country, and is an independent country. Under the ruling Archbishop are numerous high bishops, and the city is run with their co-operation. However, because Archbishop Gharnef joined forces with Dolhr, in the previous war, the city was dragged into conflict and destruction. After losing all the high bishops, Khadein was ruled by the newly elected Archbishop Wendell, who began the first steps along the road to reconstruction. But, Wendell, in order to complete his mission from Gotoh, left Khadein in the care of two youths. Merric and Arlen...They were both skilled youths, with high hopes placed on them.”
—Opening Narration, Mystery of the Emblem

Two Sorcerers is Chapter 10 of Fire Emblem: Mystery of the Emblem and its remake.

Merric will start off the map in front of the throne, so the player will likely want to use the Rescue staff at the start in order to save him from danger. Wendell is required to recruit Arlen.

The chests to the west and east of the map could initially only be accessed by the Thief staff. Once Arlen is recruited, all the remaining enemies will rush to the entrance and will not initiate attack on the playable units as if they are Thieves. Remember to use a 2-range weapon to kill the Thief that spawns east of the map on turn 10 in order to obtain the Silver Card (and the rest of the treasures should he looted those). The Clerics are free kills, but they give out very low experience points.

Alternatively, the player may opt to use the pillar in the middle of the map and Merric's Pure Water to survive turns and/or use flying units or pirates to clear enemies. The map has treasure chests on each side of the outer perimeter of the castle. Unlike in the original, those chests are accessible by walking, so Julian and Rickard should both be brought to the battle and sent along opposite sides of the map. The chests above the throne can be accessed via the Thief staff. Lastly, if the map is cleared without killing any of the clerics, the player will be rewarded the Silver Card. 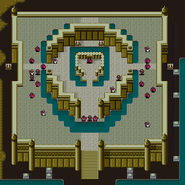