Hawk
[view]
“Even though you showed me goodwill from the very beginning... I had no trust in you. I thought you were...mocking me. Or setting me up for a trap. That's why I am the worst. I am not worthy of being your friend.”
—Ulki in a support conversation with Boyd.

Ulki (Ajuga in the German version) is a playable character from Fire Emblem: Path of Radiance and Fire Emblem: Radiant Dawn. He serves as the 'ears' of the Hawk King Tibarn, and is allied under Phoenicis. Ulki often travels with his trusted and older companion, Janaff.

In contrast to Janaff, Ulki is more reserved and quiet, and befits his position as the king's ears. Despite his stern outward appearance and reclusive personality, it is revealed through his support conversations that he has a kind heart and tries his best to help his friends as best he can.

In his support conversation with Rhys, Rhys mentions how amazed he is by Ulki's ability to take flight. Ulki is somewhat taken aback by this, and reflects on how he has been taking this ability of his for granted. Ulki and Rhys then work together to send Rhys to his patients' side more efficiently. Having flown for hours and growing tired from being shifted for so long, Ulki eventually gives up due to exhaustion. Rhys promptly apologizes, afraid that he may have pushed Ulki a little too far. Ulki refutes this claim, revealing that he has enjoyed making Rhys happy, promising to give him a ride some time in the future.

In his support conversations with Boyd, Ulki is initially suspicious towards Boyd's friendliness. In the end, he realizes how hard he has been on Boyd and admits that he has feared Boyd, suspecting him of ill intents towards the Laguz. This set of support conversations is wrapped up with Ulki befriending Boyd, letting go of some of the prejudice he has held against Beorc in the process.

Along with Janaff and Reyson (though Reyson is very different), Ulki will be the first of the bird Laguz the player receives. As with all Laguz, he is severely limited by his inability to fight at all times. Even considering this factor, he is decidedly worse than Janaff, as the latter will start all maps transformed. Ulki will have to wait several turns to begin doing anything at all. Despite this, he can still be put to good use with the right planning. Giving him the demi band might be a worthwhile decision, as his high growth rates will quickly compensate for the hit he takes to his bases from using it. His flight is also a factor to consider, as it gives him a significant advantage over most other units in how he can be used. However, since there is only 1 demi band, most players will choose to focus on either one or the other. Ulki has frankly bad base speed when transformed, and the demi band will only make this problem worse. His physical bulk and strength are slightly higher than Janaff's but not by much. As a result, Janaff is probably the better choice overall. Both can be used for a period of time, however, and if you try to do this, giving Ulki the demi-band so they can both contribute early on in maps is good idea.

Boyd: There you are! Wait a sec, Ulki!
Ulki: ...
Boyd: Why are you avoiding me? Did I make you mad or something?
Ulki: Boyd...
Boyd: I thought we were friends. I guess we can't be friends because I'm a beorc. Is that it?
Ulki: No... You are...good. It's me. I'm the worst.
Boyd: You called yourself that the other day, too. What are you getting at?
Ulki: Mmm... When you first spoke to me... I was suspicious. When a beorc like you speaks to a laguz like me... I thought you were plotting something.
Boyd: Er... But you said nice things about me when we first met! Were you lying?
Ulki: I thought the exchanging of lies upon a first meeting was a beorc tradition. You also gave me a series of flattering compliments that were not true, no?
Boyd: No, they were true! Well, mostly... Look, I was nervous! I'm not that good at talking to new people.
Ulki: I checked you out when we parted company. I investigated your name. Your background. I checked everything.
Boyd: Yowza! Really? So what did you find?
Ulki: Boyd of the Greil Mercenaries. You are a skilled fighter who says what's on his mind. It is just as you seemed.
Boyd: ...
Ulki: Even though you showed me goodwill from the very beginning... I had no trust in you. I thought you were...mocking me. Or setting me up for a trap. That's why I am the worst. I am not worthy of being your friend.
Boyd: Ha ha ha!
Ulki: What is it?
Boyd: We're so alike! At first, I was sure that you would hate me, or claw out my eyes, or...something. I didn't think I could just hang out with you like Ike does. He's just so darn natural about everything! But then I happened to talk to you, and it was really easy! That made me pretty happy. So after that, I tried to get to know you. I even followed you around the battlefield.
Ulki: I see.
Boyd: Look, beorc can be a bunch of jerks. I don't blame you for checking me out. Heck, I know what we did to your people. But now it's gotta stop. Now that you know I'm clean, you have to stop putting up walls. We'll never understand each other if you're like that. So tell me straight, yes or no? Are we friends or what, Ulki?
Ulki: Yes. I'm sorry, Boyd. If you can forgive me, I want to be your friend.
Boyd: Forgive you? Pah! I wasn't even mad! I was going to be your friend from the very beginning!

Rhys: Um... H-hello! Hello there!
Ulki: Mmm?
Rhys: Er... I'm... I'm sorry! I didn't mean to make you mad! I just wanted to talk to--
Ulki: I'm not mad. Can I help you with something?
Rhys: Ooh! Oooooh! I'm so glad! I'm Rhys! N-nice to meet you!
Ulki: Er...hello. I am Ulki.
Rhys: Er... Well... Say, you can really fly with those wings, huh?! I saw you turn into a hawk before... It was amazing! I envy you!
Ulki: Mrrr?
Rhys: Oh, sorry... That probably sounds weird. I've always been sickly. When I was little, I spent a lot of time in bed. So... I used to gaze out the window and see all the little birds flying around the sky... It must be fantastic! Flying wherever you want, whenever you want?!
Ulki: Um... Fantastic. Yes. I suppose. I never thought of it.
Rhys: Oh, I don't blame you! After all, you've been flying since you were born... Soaring through the skies like a puffy cloud!
Ulki: Mmm? Clouds do not soar... I am confused.

"General, the bird tribes are in your debt. ...We are grateful. Please take care."

Ulki's portrait in Path of Radiance.

Artwork of Ulki in Fire Emblem 0 (Cipher) by by Nekobayashi.

Ulki as a Bird Tribe in Fire Emblem 0 (Cipher).

Ulki's full portrait from the Path of Radiance art book.

Ulki's battle model as an untransformed Hawk in Path of Radiance.

Ulki's battle model as a transformed Hawk in Path of Radiance. 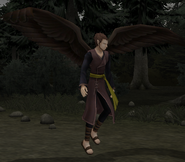 Ulki's battle model as an untransformed Hawk in Radiant Dawn.