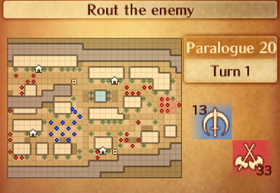 Senno (Must be captured)

Ultimate Power (究極最強の魔書 The Ultimate and Strongest Magic Book in the Japanese version) is Paralogue 20 of Fire Emblem Fates.

This paralogue is unlocked once Odin has achieved an S-Support with a female character.

This Paralogue is one of the more useful Paralogues in Conquest, as it is one of the very few ways to obtain the Horse Spirit and Calamity Gate. The Horse Spirit provides massive buffs that can make a difference in winning or losing, and the Calamity Gate is extremely useful in Chapter 17 and Chapter 25. A free Spirit Dust and Lighting tome can also be obtained in this Paralogue.

In this chapter, Senno and the Outlaws/Adventurers (based on your chapter progression) will attempt to reach the visitable houses. If they do, they will raid it and the items they have will be lost. Players should try to focus on the Horse Spirit and Calamaity Gate housing villages first; Lightning and Spirit Dust can be bought in your shops.

There is a wide amount of enemies in this Paralogue, with an equal mix of both Hoshidan and Nohrian enemies. Try to reach the houses before the bandits do; ensure your unit(s) are strong enough to reach there and hold their ground at the same time. Enemy reinforcements will appear as the turns progress; the initial two reinforcements appear from the south/north walls respectively. These are two-layered walls that have 30 hitpoints each.