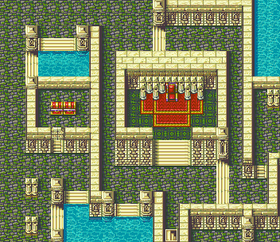 Ephraim, Kyle, Forde (and Orson for this chapter only)

Chapter script
[view]
“Do not worry. At Prince Ephraim's side is... a friend, shall we say. When the time is right, our friend will move on our behalf...”
—Tirado

Unbroken Heart is Chapter 5x in Fire Emblem: The Sacred Stones. This is the first side chapter and also the first chapter you play as Ephraim, Eirika's twin brother. You also control Kyle, Forde, and Orson. While Kyle and Forde fulfill the Cain/Abel archetpes, Orson is powerful in contrast to the rest of your party, and can handle much more combat, but any experience he gains is wasted, as he is no longer playable at the end of this chapter, and any items he carries will be lost as well.

Kyle and Forde cannot actually die in this chapter. If their HP reaches zero, they only retreat. They will be playable in later chapters even if they retreat. Similarly, though it is an unlikely occurrence, Orson will merely bow out of this chapter, and whether he "dies" in this chapter has no impact afterwards.

It is the only gaiden chapter of the game, and has no requirements in order to reach it.

This chapter is rather simple. Make sure to keep your units well-healed, and do not worry too much about Orson, since he will not be usable in the near future. It is highly recommended to trade all of Orson's equipment to your other units, since items are scarce at this point and Orson's weapons and items will be lost later if you let him keep them. In addition, it is also highly recommended to use Orson as a shield and as bait to lure enemies into attack range one by one. At this point in the game, Orson is nearly invincible to most attacks (most attacks do between 0-2 damage, but the enemy Shaman may do around 4 damage), so unless you seriously misuse him, he should be fine through the entire level without a Vulnerary. The level has a lot of narrow hallways to use to your advantage, so take your time.

Do not miss any chests, and try to pick one unit who you want to be a prominent figure in the endgame, as there is plenty of experience in this level and not many people to give it to. If you don't care for Kyle or Forde, most experience is best aimed towards Ephraim. On the other hand, you may want to divide up the experience more or less equally. Other than that, just keep moving forward and open all the chests, and be conservative with every Elixir.