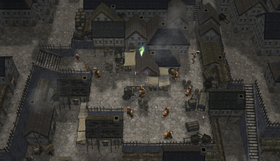 Micaiah and Edward (from start), Leonardo (from turn 4)

Chapter script
[view]
“Who, the Begnion soldiers?! Hah! They don't care a lick about us! We lost the war, and they won. We're nothing to them. They're only interested in chasing down the Dawn Brigade. They let the real Bandits run wild and brutalize us.”
—A Daein civillian

Under Gray Skies is the first prologue in Fire Emblem: Radiant Dawn.

Micaiah and Edward are hiding in Nevassa and waiting for Leonardo when Pugo and several brigands attack the town.

Edward - Edward is a Myrmidon and is a pretty good unit, but not as a tank, so don't treat him as a tank. He comes at Level 4 and is decent if you want to put the time into using him. Baby him a bit to start, but once he gets up to par with Nolan, he can do some decent damage. His one problem to start is that he has a rather bad defense growth rate at only 35%, yet once he class changes, his defense will gain a well thanked and needed boost; not too much more, but enough so that he can take a couple more hits.

Micaiah - Micaiah is a Light Mage, and a good one at that. She starts out only at Level 1, but grows pretty fast considering she is in every chapter of part 1. Even if you don't like her character that much, it is still recommended that you use her, due to the fact that she is required in every single map you can use her on. She doesn't hit too hard to start, but with her amazing 80% growth on magic, that will soon change. She will need some health so she can take some hits, but it is suggested that you keep her in the back as a support for some small damage, and for healing with her ability Sacrifice. Start feeding Micaiah kills early on, and you'll see great results.

Leonardo - Leonardo is an Archer, but is sadly not that great. He comes in at Level 4 on the fourth turn. If you want to, you can use him if you like his character or just want an archer on your team for the first part. He is the only archer you obtain in part one, or even overall with the Dawn Brigade in the whole game, unless you change up your team and add an archer to this group in the beginning of part four. Overall, he is not that great and will need to be babied a lot if he is to get to a strong usable point; his strength growth is rather low at only 40%, and his speed is only at a 35% growth rate, and those are two stats that really help archers. So if you really want to use him, go ahead, but there are far better archers in this game.

The strategy is easy to setup and perform as it is the first level. Attack the nearest brigand indirectly with Micaiah and then defeat him with Edward. Defeat any enemies in the area directly south of there, and then heal and prepare for the rest of the fight. When Leonardo arrives, the strategy will remain similar (i.e. Attack inderectly and then defeat with Edward), except for the fact that it will be somewhat easier. Once the plaza has been mainly cleared except for the boss, gather your forces and attack him with Leonardo and Micaiah. Then attack him with Edward. If Pugo survives, he will be dumb enough to attack Edward on his turn. Defeating him and all other enemies will end the chapter.