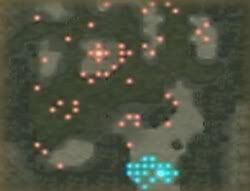 Bastian, Volke (Pay him 3000G with Bastian or Elincia)

Chapter script
[view]
Tibarn's group passes quickly through Salmo, drawing steadily closer to the imperial capital. The hardships of the journey lead the group to overcome their racial differences, and form bonds of friendship and trust. However, Almedha, the queen mother of Daein, remains alone and aloof, lost in thoughts of her own. Her son, Pelleas, also seems to guard some secret thought, tucked deep within his heart.

Unforgivable Sin is the fifth chapter of Part 4 in the game Fire Emblem: Radiant Dawn. In this chapter, the Hawk Army has to fight a group of Feral Ones commanded by Izuka. Four Feral Laguz units will be summoned around Izuka every turn until Turn 26.

Before the chapter begins, Geoffrey and Bastian reunite with the Hawk Army. Amy, the adopted child of Callil and Largo, along with a mysterious black-caped man are seen following along. Another member of the company is revealed to be Volke, who has been hired to assist in the capturing of a certain criminal. This criminal turns out to be Izuka, who developed the drug which causes Laguz to transform into what is known as the Feral Ones. He escapes and summons a large number of Feral Ones, consisting of tigers, cats, hawks, ravens and red dragons.