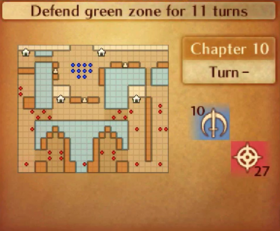 Chapter script
[view]
“The group passes through Fort Dragonfall, liberating Azura, who had been taken prisoner there. Meanwhile, the Hoshidan army remains hot on their trail.”
—Opening Narration

In this chapter, the objective is to defend the green tiles from enemies for 11 turns. If any enemy unit breaches through into any of the green tiles, you automatically lose.

On the 7th turn, Takumi triggers a Dragon Vein and dries all water tiles. The Sky Knights in Guard Stance in 9th turn will attempt to breach to the green tiles without stopping, though they will not attack player units in range.

At the start of the chapter, you should immediately visit all the houses to grab the rewards before the sheer amount of enemies prevents you from reaching them.

At first, the player will be placed in a relatively well defended location, as there are three ballistas on the map which can help weaken up clumped groups of enemies, and the sea provides a natural moat against ground units. However, there is no wall in the eastern side and the wall west of the western ballista and below the middle ballista have been neglected, and thus destroyable.

Camilla, Beruka and Selena arrive shortly after the beginning of the chapter. As a powerful pre-promote, Camilla is an excellent candidate for attempting to reach the houses and to kill off problematic enemy units. While Selena and Beruka are relatively unremarkable in their abilities, they can aid in plugging any holes in the defences.

As the turns pass, more Hoshidan units arrive, and Takumi eventually uses the Dragon Vein, removing the moat and making the area harder to defend.  You can prevent him from doing this by reaching him quickly, however, your attackers will need to be strong as he can do relatively high damage. On all modes, he comes with Point Blank, allowing him to retaliate at 1-2 range. On Hard and Lunatic Modes, he will have Quick Draw to increase his damage whenever he starts an attack and Wary Fighter which prevents him or his attacker(s) from doubling. On Normal, Hinata and Oboro only move if a unit enters their attacking range. On Hard and Lunatic however, they start closing in the late stages of the level. This coincides with the last, largest waves of Hoshidan reinforcements. Using Freeze to help thin out the crowd can greatly aid chances of survival. Haitaka, the capturable boss of the previous chapter, has Rally Defense and can prove to be another powerful tool in keeping your army alive.

Enemies usually refrain from attacking if they cannot deal any damage, unless they can safely attack with a thrown weapon. Try to have a unit with relatively high defence but enough for the enemy to hit them so that they can get experience, as you will have to attack them first if your units' defenses are too high.

On Hard and Lunatic Mode, some Oni Savage reinforcements come with Lunge and move units out of the way for their fellow soldiers to breach the line.

Enemies only breach the line if they do not perform any other action; this means if a hostile moves on a green tile but attacks one of your units nearby, you will not lose the level. You should take them out quickly before the next enemy phase starts, though.

The transcript for this chapter can be found here.