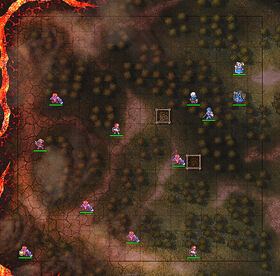 Chapter script
[view]
“A chaotic night in the woods brings tremors and terrors, but a swordsman named Marth comes to the rescue. Back in Ylisstol, the Avatar meets Emmeryn.”
—Opening Narration

To begin, there are a few things that are worth knowing about this chapter.

While the prologue should not have been too difficult, this is the true start what the game has to offer. Take note of the enemy placement and the starting positions. Instead of Barbarians, the enemies are Fighters, which are mostly slower. The easiest way to do this chapter is to have Frederick wield the Bronze Sword paired up with Chrom; he only needs 13 speed to be able to double Fighters.

There are generally two options available for this chapter, Pair Up Chrom with Frederick or Pair Up Frederick with the Avatar. They can wait on a fort and handle most of the enemies. Even the Fighter with the Hammer will only have about a 20% hit chance on him if Frederick is paired with Chrom and has the Bronze Sword.

Everyone else should keep out of range, but they should be able to dispatch the Mercenary to the south at the very least. On Turn 2, when Sully and Virion appear, Sully will only take about 9 damage from each hit from the Mercenary when she is on a forest.

The boss can be a bit tough, especially with his 1~2 range and the forest terrain hindering movement. However, he only has 9 Speed, so he should not be too much of a danger.