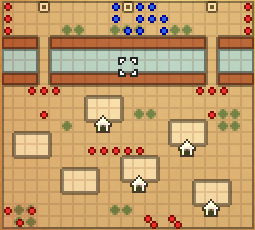 Chapter script
[view]
“After defeating the Hoshidans at Macarath. Avatar returns to Nohr. There, Avatar is ordered to march to Cheve and stop an uprising.”
—Opening Narration

Uprising (反乱鎮圧 lit. Suppressing Rebellion in the Japanese version) is Chapter 13 of Fire Emblem Fates in the Conquest Version.

Your units start off between a rock and a hard place; there are plenty of aggressive and powerful hostiles surrounding you, and there is not much space to move around for your units.

To deal with them, have high resistance units go for the western bridge, while high defense units go for the east. Any Armorslayers or Hammers you have in possession will help deal with the knights on the eastern side, but Takumi can still be an issue since he can pack a lot of damage with his attacks. Unlike in Chapter 10, Takumi's skills will be replaced (most notably his Point Blank skill), making him relatively easy to dispose on pretty much any mode, as he doesn't have any dangerous skills apart from Pass on Hard/Lunatic modes.

Once the player breaks through both sides, there are two more groups to deal with; Scarlet's group and Reina's group. Reina's group has a sizable amount of Cavaliers, two of them having Beast Killers on them. Deal with them quickly; Niles (or any other bow user you have) can easily take down Reina in one or two hits.

Quickly move to the visitable houses for to collect several decent rewards, including the 5,000 gold. During the battle, an Outlaw will appear next to Scarlet and attempt to loot the houses. He only has 3 movement, so he will take longer to reach them, but you should either kill him off or visit all the houses before he gets to them.

Scarlet and her remaining fighters will be the last units left. Once Scarlet moves towards the player, four Wyvern Riders will appear from the west and four Cavaliers coming in from the southeast. Lure Scarlet outside of her attack range, especially on Lunatic Mode where she comes with Death Blow and when her health is falls below 3/4 of her max health, her personal will activate and give her an additional 50% critical hit rate. Once she falls, take out the rest of the hostiles.