Ursula is one of the Four Fangs, an enemy character in Fire Emblem: The Blazing Blade sent out to kill Eliwood, and is later resurrected as a morph by Nergal.

Ursula is unique amongst the Four Fangs, as she is the only one who specializes in magic. She is known as the Blue Crow amongst the Black Fang members. She shows complete devotion to Brendan Reed's new wife, Sonia, and seems to be aware of the fact that Sonia is a subordinate to Nergal.

Ursula is first seen in Chapter 7x of Lyn's story, where she assigns a Black Fang operative, Beyard, to recapture the children, Ninian and Nils, for reasons unknown at the time. She is not seen again until the chapter Kinship's Bond, where the Four Fangs are assigned to kill the lords Eliwood, Hector, and Lyndis. The Four Fangs were deceived by Sonia that the three lords were corrupt nobles who had to be stopped. Later, Ursula is seen in another chapter, handing the tactician a Hammerne staff because, despite her orders to kill the lords, she did not want Vaida to succeed in doing so.

Ursula is seen for a fourth time in the chapter Battle Before Dawn, where she witnesses Jaffar attempting to escape after abandoning his assignment to kill Prince Zephiel for King Desmond, and Nino for Sonia. Ursula then takes it upon herself to execute the law of the Fang and kill the two traitors, in addition to completing the assassination of Zephiel. Eliwood, Hector, and Lyn arrive at the same time, and Ursula battles both groups. Ursula ultimately fails, either dying in the battle or, if she survives the battle, is killed by Limstella for failing in her duties. Her quintessence is harvested by Limstella for Nergal either way.

She is seen one last time in Final Chapter: Light, as a morph created by Nergal's magic. She wields the powerful tome Giga Excalibur, which the player receives upon her defeat.

Ursula is an extremely devoted member of the Black Fang, seen as a cold, heartless assassin to her targets. She never hesitates to coldly remind those under her the punishment for failure, and expresses little concern for any members of the Black Fang, with the exception of Sonia, whom she worships (her last words, in example, are a last request to give Sonia a report about the situation in the Bern Manse). She is also rather honorable, accepting the Fang's Judgment for failing to accomplish her target should she survive Battle Before Dawn. She expresses deep dislike of Vaida, most likely because of her treachery toward Bern, and possible fear of losing her place.

Help Description: The Blue Crow of the Four Fangs. Sworn to Sonia.

Help Description (Morph): A morph made in the form of the Blue Crow, Ursula.

Ursula is the third of the Four Fangs encountered in a chapter, and the second faced as a boss (excluding Jaffar). Despite being a Valkyrie, Ursula has well-rounded stats and is skilled in anima magic, expressed when facing her with Bolting and Elfire. Her offensive magic is extremely dangerous, and, due to her chapter's nature as a Fog of War mission, has a tendency to catch players completely by surprise with her deadly Bolting tome. Her tendency to use bolting can prove to be her downfall, however, as its immense weight slows her down tremendously, leaving her to rely only on her mediocre defense and HP for protection.

Ursula is particularly dangerous on Hector Hard mode. She can kill Nino and Zephiel in one round with ease with her Bolting, and the A.I controlled Nino has a tendency to wander within her range.

She returns as a morph in the final chapter, with increased stats (though interestingly her Resistance has dropped by 3 points) and the spellbook Giga Excalibur.

Blue Crow
A cruel member of the Black Fang assassins. Lends her service only to someone truly perfect. Appears in Fire Emblem: The Blazing Blade.

Clear-Blue Crow
An elite member of the Black Fang, known as the Blue Crow. Her motives for visiting the beach remain mysterious. Appears in Fire Emblem: The Blazing Blade.

Ursula: Tell me... are you Afraid to die?

Ursula: I cannot understand you. You serve perfection in the form of our masters. Yet you abandon such happiness?
Jaffar: ......I ensure that Nino lives. That's all.

Ursula: Why won't you die as Lady Sonia wishes? You, born of garbage. This was your one chance to be useful.
Nino: My mother... She would not say such things. I...don't believe it. I don't believe anything you have to say!
Ursula: Stupid child... I'll see that you don't suffer at least.

Ursula is illustrated in the trading card game Fire Emblem Cipher with the following cards: 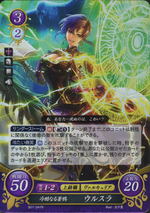 The name means 'little bear' in Latin. The legendary saint Ursula was martyred by Huns while on a pilgrimage.