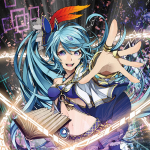 Hi! I'm a fan of the Fire Emblem series, being that my first (and favorite) game is Awakening. I was convinced to pick up a copy of the game after I was formally introduced to its main characters in Super Smash Bros. for Wii U. Since then, the Fire Emblem series has easily become one of my all-time favorite video games series, despite me only have played a few titles thus far... But I will play all (ok, most) of them someday!

If there is a prize for beating the final boss of Tokyo Mirage Sessions without using a single Master Seal... consider me a recipient! ;)

Kind-of ironic my icon depicts a Zelda character (another favorite video game series), but then Lana does have a Fire Emblem-feel about her (using tomes and all), so whatever. XD

I'm a huge fan of the Oxford comma, so I WILL be adding it on the pages! Seriously, why don't you use it, people?! But otherwise, I'll be editing where and when I find something to edit while exploring the wiki.

The following armies are still a work in progress.

Retrieved from "https://fireemblem.fandom.com/wiki/User:Fastesthe1?oldid=396945"
Community content is available under CC-BY-SA unless otherwise noted.