The cleric-looking person is Felicia. I take it you can't read Japanese. It's not same to assume anything about If yet. JolteonUltra (talk) 19:57, February 21, 2015 (UTC)

Don't assume Felicia is strictly on the Hoshido route. There is evidence that she is in both routes as seen in a Serenesforest post. http://serenesforest.net/forums/index.php?showtopic=53020—Nauibotics (talk) 20:15, April 19, 2015 (UTC)

Seriously, stop adding Felicia to Hoshido. We have no clue where she's from and she's clearly not exclusive to the Hoshido route. Don't assume. You've already done assumptions about if that were wrong before. You put that Felicia was the blue haired dancer in the trailers when they were clearly separate characters. We're only adding credible information, not assumptions.—Nauibotics (talk) 20:44, April 19, 2015 (UTC)

Nauibotics, why do you keep changing my points

1. You're contradicting your own points 2. You're the only one who's changing my bit on Felicia

She's been confirmed for both routes so yes she doesn't belong to either country but because she's in both routes that makes her a main character as she is always with Avatar and Aqua.

I don't think Felicia is even remotely a main character like how the Avatar and Aqua are, who are clearly the two protagonists of the game. We're listing characters based on where they are from, which we don't know where Felicia is from. I'm not contradicting myself nor am I making assumptions like you are. You're the one who even tried to put that she's Sakura's maid on the Hoshido page when we don't know nor does it seem likely that she is. Together with the Felicia/Aqua dancer point from earlier is all assumptions you made that were wrong or cannot be confirmed at that point. For now, she's unaffiliated until we get real confirmation. It's the same for Gans as well. Also we don't list the games under their literal translations. If the game has no official localized title , like Shin Monshō no Nazo ~Hikari to Kage no Eiyū~, we use the romaji title.—Nauibotics (talk) 21:15, April 19, 2015 (UTC)

The fact that he was called both prince and dark knight is on serenes forest main page. I'm keeping it until other sources (that are reliable) claim otherwise.LicLac (talk) 07:14, May 9, 2015 (UTC)

http://serenesforest.net/2015/05/08/fire-emblem-theme-song-singer-blurry-promo-display/#more-26353  There, check it. Besides, since he's from the royal Nohr family, it makes him a prince;it's not that hard to put it together. In the second trailer we also see him on horseback - briefly - but still. And he's not a mage, seeing as they are always wearing light clothes like robes, and NOT armour like Leon is. His overall design is very similar to the Dark Knights in Awakening as well.

Vaike and the Berserker classEdit

In Awakening, only Barbarians promote to Berserker, and there are no playable Barbarians without reclassing. Fates is the only game where Fighters can promote to Berserker, in all other games, Fighters promote to Warrior and/or Hero. Vaike not being intended to be a Berserker is also shown by his model, which is incredibly skinny, in contrast to his muscular frame depicted in his other classes. Emperor Hardin (talk) 14:52, July 13, 2015 (UTC) 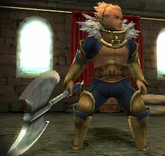 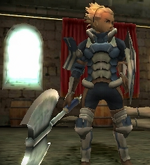 Vaike's second promotion choice
Add a photo to this gallery

I see that you're changing all traces of the name "Belka" to "Berka" and I must ask: Is that actually her English name, or are you just doing this because of the fan translation? If it is her English name, where's the proof? If you're doing this because of the fan translation, then that's incorrect because of Yusuke Kozaki's sketch of Camilla with Belka, it refers to her as Belka. Please respond ASAP. JolteonUltra (talk) 17:14, August 2, 2015 (UTC)

To be brutally honest, I'm not certain, but I've checked a few websites and they say Berka. Same for Asyura. But it does relate to Berka's current Japanese name Beruka. If you feel It's not correct, feel free to revert it.

I noticed you've been uploading the cards from that new set...and just putting them at the end of the gallery, with no regard for order or reason. Could stop that. We have things arranged in a specfic order for a reason and I know you know this since the Jagan and Marth cards, which are in their proper places, are what inspired you to upload the rest of them anyway. Could you please go back and put them in the right order? And pay attention next time.--Otherarrow (talk) 16:15, August 16, 2015 (UTC)

Oh, you did. Thanks. Sorry if I got a bit snappy there, people mucking with the galleries is a bit of a pet peeve of mine, and I guess I am a bit fussy and obsessive over it. Thanks again and sorry for the trouble.--Otherarrow (talk) 16:38, August 16, 2015 (UTC)

It's alright, what I was going to do was add them all first so people could at least see them then order after. Ajitunes13.

It doesn't make sense to have non-playable characters categorized as Characters, plus they are already categorized to their corresponding game. And a little note of what I was doing, I realized it should be best to have the Character category as the parent category which contained only subcategories and listing pages. Hope you understand =] -- Khang (talk) 15:26, October 17, 2015 (UTC)

Sure, that's fine but I do think there should non-player character category page. Ajitunes13.

I was wondering where you got [this image http://fireemblem.wikia.com/wiki/File:Anankos_dragon_form_cutscene.png] from, as I'd like to take a true PNG capture of it, not a denoised version. Robotortoise (talk) 00:21, June 10, 2016 (UTC)

I took a picture during one of the cutscenes when I played the Revelation intro video online. Also, the dying picture of Azura is the same, just watched the dying cutscene on YouTube. Ajitunes13 (talk) 6:59, June 10, 2016 (UTC)

Huh. Guess it's just the 240p image upscaled, then. Thanks. Robotortoise (talk)

Retrieved from "https://fireemblem.fandom.com/wiki/User_talk:Ajitunes13?oldid=329385"
Community content is available under CC-BY-SA unless otherwise noted.