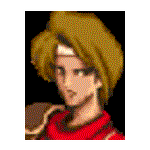 The problems with your additions are due to either situational errors or characterization differences. We've been pretty strict about each of these so I'll explain each in full:

I'll concede on Sakura, but what in blazes are you saying about Lugh and the Bartre/Echidna and Juno/Dayan situation? Lugh is literally the first mage you get in the main story of FE6, the only other magic user beforehand is Elen. Juno and Dayan are never playable together, they are recruited on two seperate routes and aren't both obtainable in a single playthrough, the same goes for Echidna and Bartre. I really don't get your argument, they pretty much fulfill their Archetypes almost perfectly.GreatDane112 (talk) 06:04, May 2, 2017 (UTC)

Um... Sorry to butt in, but you're wrong about Sakura. She and her siblings were captured by Zola in the Conquest route, and he also briefly held her hostage in the Revelation route. Signed by, ~ SirNeptune (talk) ~

Ah, I see. yeah I was wrong about Barte/Echinda and Juno/Dayan. I forgot they are technically separated like Arran and Samson, just by an entire chapter rather than a Village choice split and EXP sum difference respectively. Still, Merric's archetype requires that he have his teacher known, as even though Ricken has similarities such as his affinity for Wind Magic and in his build, we do not know who his teacher is and we don't include him for that matter. Lugh is the same, unless he states who it is. To my knowledge he doesn't but please enlighten me if he does.
BTW, as for the Pegasus Knight sisters, yes Phila is their commander and all three are members of the Pegasus Knight Squad, however the fact that Triangle Attacks don't exist in Awakening due to her canon death means that they don't qualify for that Archetype entirely. We discussed it before back when Awakening came out whether or not to include them because Phila is not recruitable.
Same for Scarlet being a Minerva, she already is rebelling against her home nation, not being forced to fight for it in both Birthright and Revelation like Minerva does in her original game. In fact, in Birthright, you don't fight her at all. In Revelation, sure you fight her, but again, she's already rebelling against her home nation and her recruitment is to stop another nation altogether.—Nauibotics (talk) 06:21, May 2, 2017 (UTC)

BTW SirNeptune, Conquest, sure, but she's not recruitable in that route. In Revelation, that happens after a map ends and its not even for like, 30 seconds before she's released and not really by the player having to fight an entire map to save her. Plus she's recruited BEFORE she's captured in that short scene. Lissa from Awakening for example is similar to a Lena build, but we don't include her as a member of the archetype she does not fulfill the characterization/story similar roles. Sakura is captured in the route where you can't recruit her and in one of the routes she is captured, she is already recruited and is not required to be saved over the course of an entire chapter.
Thats the reason why we've made route distinctions for FE14 as they are archetypes in specific situations. This is applies to like Camila really being a Minerva more in Revelation than in Conquest since she only fights you then joins you in that route or Gunter being more of a Jaegan in Revelation than in Conquest in his appearance, stat spread, and similar situation to his archetypes. Most of these have had deliberation in the past.—Nauibotics (talk) 06:21, May 2, 2017 (UTC)

You're being too strict on the Archetypes, remember that these are still at the end of the day generalizations. Not every character has to tick off the boxes of what constitutes an Archetype, Lugh for example may lack the wind affiliation and mentor, but he retains the personality, age, and gameplay purpose of a Merric. If we were this stingy on our criteria then there would be far less "reoccurences" than is necessary, and I believe Archetypes should be allowed to take minor departures so long as it keeps consistent enough to be deemed a part of such.GreatDane112 (talk) 06:33, May 2, 2017 (UTC)
It's not that I'm being strict about it solely on my beliefs, we've been strict about this in the past. For example, Ricken is basically just like Lugh and Merric, but we have stated that they need to have clear characterizations that are consistent amongst themselves and the commonality of the Merric Archetype is that they are taught by a sage or had a mentor figure of sorts stated in game that taught them. Wind Magic is a commonality of the Archetype, but for example, Erk is more Fire Spells, but we include him because we know that he was taught by Pent and he's the first mage recruited. He hits two of the most important traits of the archetype. Even Hayato qualifies as he is the first mage in Birthright and Conquest and was taught by Fuga. The magic type part is one part of that archetype that is inconsistent at times, but the most similar traits between Merrics are that they are the first one recruited and have a known teacher (not necessarily by name as Soren says he was trained by a Sage, but he's dead). Archetypes are very hard to define in the game and if you look at the Talk Page of the page, you can see how difficult the subject is. Even some Archetypes I brought up in the past, like a Tiki archetype got shot down pretty fast. Im not being nitpicky because i wanted to, is just that the page as a whole needs limitations as the admin has stated.

Ah, I see. Fair enough. I totally forgot to account for that fact. While we're on the subject of archetypes, does Elise really fit the Maria archetype? She, unlike Sakura, was never captured in any route. Signed by, ~ SirNeptune (talk) ~

Like I told Nauibotics, there's still enough room for leeway. It doesn't have to be 100% the same elements, there can be variation so long as it's consistent with other aspects.GreatDane112 (talk) 06:40, May 2, 2017 (UTC)
In Conquest, definitely not. In Revelation...I can't say for sure really. She's not being held hostage by Nohr, but she does fulfill two requirements of being noble blood, being recruited after the Lena of the game, and having a sibling in the army that she wants to fight for during the war. Technically we have Pricilla who isn't captured either so there is that. Not all Marias are captured, but the other points are more important.—Nauibotics (talk) 06:59, May 2, 2017 (UTC)
Honestly for most Awakening characters and Fates characters, we've been oddly strict about whether or not they qualify for their archetypes. Gaius is similar to the Julian Archetype, but we've said that because the game's lack of canon pairings makes it difficult to classify them as having similar traits. He's recruited WAY after the Lena of his game and he's an enemy. Lon'qu is similar to the Navarre archetype in the same vein, but because he's not fought before recruitment he doesn't qualify, even though most players put him as Lissa's preferred marriage choice. Even Ricken is an example of how strict the page is. We've tried to say that he's a wind magic user in similar vein to Merric, but because he's not the first one recruited nor does he have a known master, he's not a true Merric. Archetypes are difficult really, but I guarantee you, even if I don't revert it, it will be by most of the other seasoned editors on the site.
I also removed Ryoma from Camus as, though he's your enemy on Conquest, he fights you near the end of the game, and he will not join your side due to loyalty to his nation, there's one key thing to consider. Hoshido is technically not the bad side and the Avatar, while he doesn't want him to fight with them, does not try to recruit him, nor the other Hoshidan Royal Siblings as well. Really you are the Camus for fighting for Nohr who is clearly the evil side between the two nations and refusing to fight for Hoshido despite knowing Garon's evilness. It's weird like that.

"They" would be the admins. Otherarrow has been pretty firm on his stance on most of these Archetypes. I am leaving a message on his wall to see what he thinks. In the mean time, leave it without your addition and let him solve it so we can end this edit war, okay? —Nauibotics (talk) 07:54, May 2, 2017 (UTC)

Alright, I'll comply, though I likely won't agree. I really don't get why this system has to be so strict, it should be a place to see how certain elements reccur throughout the series. I guess that's the harsh realities of rules.GreatDane112 (talk) 07:59, May 2, 2017 (UTC)

That is fair, and to be honest, I don't like the strictness of the Archetype page either. But I'm making sure to keep it consistent as per his stance on it in the past. It's nitpicky, but I'm just following the protocol he made clear to me and many other editors YEARS ago. There's no frustration or anger from me towards you. You really have no way of knowing how its been handled for years, believe me, you're not the first person who has been vocal about certain Archetypes and you certainly will not be the last.—Nauibotics (talk) 08:05, May 2, 2017 (UTC)

No offence, but the GIF for myrmidon that you uploaded is... bad. Can you edit it to at least make the black box around it smaller?

Do you have a better way to cut it? I have limited experience with gifs so I'd like any help to covert it to something more pleasing. For the most part it will remain just as a placeholder, so if we can get a much more clear looking gif I'd love that.GreatDane112 (talk) 10:56, May 2, 2017 (UTC)

It seems you're gonna be a frequent editor here, so I advise that you should take some of your time to read over our policies and rules to avoid possible future conflicts and ensure the quality of articles. Try to use talk pages for discussions as much as possible and avoid edit war. Feel free to contact me if you have any difficulty with editing. -- Khang (talk) 14:30, May 2, 2017 (UTC)

Alright, thank you Khang. By the way, thank you for renaming the Gif, I think I took the guideline too literally. I hope we can get a higherer quality version soon, but this was the best I could scrap together. I hope to do my part on the team, I'm sorry for any issues I may have caused. I hope to contribute more in the future! GreatDane112 (talk) 14:37, May 2, 2017 (UTC)

Please read the forum again, I said to include only official artworks from the main series, excluding artbook, dlc, spotpass, and heroes (with Anna the only exception). -- Khang (talk) 12:15, May 7, 2017 (UTC)

Please stop adding the Chap template to the pages, as noted on the template page, it should no longer be used since the Chapter infobox template have already supported the navigation. -- Khang (talk) 14:12, June 30, 2017 (UTC)

Retrieved from "https://fireemblem.fandom.com/wiki/User_talk:GreatDane112?oldid=405824"
Community content is available under CC-BY-SA unless otherwise noted.