I see BOTW doesn't have a winner yet. What's the point of having Battle of the WEEK if the same battle is there for almost three months? I guess its a good thing that its been moved to the Wikia prefix... should we get rid of it completely or should somebody take over? If so, I think this would be a good project for Trueblade because I'm sure you've noticed that he enjoys that sort of thing and I think he would be responsible enough to take care of it. Plus, it's a good activity for a newer user like him. But, I'd also be happy to get rid of it. I say if Trueblade wants it, we keep it but if it goes dead again, we trash it. What is the verdict?
C13g3 -

Well, if you remember correctly, I did not want it in the Wiki prefix in the first place...and it has been abandioned for a while...and as for activity for newer users, well, I may be a bit of a hypocrite for saying this, but we got a wiki to edit.--Otherarrow 00:26, 13 January 2009 (UTC)

Meh, no one does it anymore... I think Trueblade and other newer users could help with more important things. Seriously, how long was the Need Image template for FE11 there before I gave it an image???? Basically, we should kill it. The winners are usually painfully obvious anyway...Silvie 01:32, 13 January 2009 (UTC)LOL FORGOT TO SIGN!!!!!!!!!!!

I agree. Will you do the honors? BTW, I'm just about ready to post my first tutorial! I'll have some example images uploaded so dont mind those.
C13g3 -

Anyone can mark for deletion (else, we admins would not know if we were away at the time) but only admins can delete.--Otherarrow 01:42, 13 January 2009 (UTC)

Anyway, there's still a redirect to Rocking chair/BOTW. I've posted my unfinished sig tutorial in case you guys want to check it out. it's here.
C13g3 -

Currently, you add the category [[Category:Pages proposed for deletion]] to the page, but we might make a template later.--Otherarrow 02:08, 13 January 2009 (UTC)

The WikiDragon wikipedia article has been deleted and there's still a link to it on the WikiDragon userbox so I'll remove the dead link.
C13g3 -

I'm gonna go Sherlock Holmes and see if the moron who created it/got pissed over its deletion is still here, and if not, it goes bye-bye....with your permission.Silvie 21:49, 13 January 2009 (UTC)

Oh good. I banned that guy twice already, and the only reason I kept it is because Semaj insisted it was important to the fandom or some such baloney.--Otherarrow 22:43, 13 January 2009 (UTC)

I've been looking at Semaj's contribs for the other wikis he mentioned he contributed at and he hasn't done anything there either for a while. He even cleared out his page on IT Crowd wiki. I then remembered how he discussed having some users promoted to higher positions about two weeks before he disappeared. His last edit was also changing the Sitenotice back to what it was before, possibly because he thought you wouldn't get around to changing it yourself. His last edit was also very near to the end of the year. I believe it's time to consider that his leaving was perhaps pre-meditated and that this was his last year as a wikia contributor and that he simply did not want to tell us that he was leaving for good. I hope I'm wrong but everything seems to add up. What are your thoughts on the subject?
C13g3 -

Why is their always numbers after you edit something?

Returning to the issue at hand...

Since Iferuno hasn't replied yet, I assume he's isolated and eliminated his problem so we can continue our discussion.
I agree with Silvie, preparations should be made. Some users should be given advanced privileges as we once again have only one advanced privileges user: You. I imagine it would be helpful for you to have some help. I think it's time to put Template:Requestbox in action. You must take the initiative this time, Otherarrow.
C13g3 -

Thank you, Otherarrow. I hope I did not sound too disrespectful earlier, after all, you still are my boss. In any effect, I'm glad I inspired you. Also, I'm glad that I didn't have to fill in that box. That "Why do you deserve it?" question was like an elementary school health class question. LOLz. I promise not to abuse my privileges.
C13g3 -

What privileges will I have as a mod and when will they be active?
C13g3 -

Great! I look forward to working together more in the future.
C13g3 -

After I edit a page, it says at the bottom that the page was edited by myself in September or November instead of January 20th. I originally thought that it might just be an edit that I made before and the page didn't update but it said in page history that I never made an edit on that page before. BTW, What's the difference between rollback and undo?
C13g3 -

Uh...Huh. That has never happened to me before. And rollback you instantly revert, while undoing takes you to the edit screen. Rollback is more useful for dealing with vandals and the like, speedy reverting I would say.--Otherarrow 22:32, 20 January 2009 (UTC)

Ah! Thank you. I guess its a good thing that Rolf and Gheb pages are cleaner now so I might never even have to use rollback but who knows?
C13g3 -

I've been looking at the mainpage and noticing that the featured article has been swordmaster for a really, REALLY long time. We have the voting for a reason so It's about time we change it.
C13g3 -

Yes, but most of the people voted because they liked the character, not because the article was particulary good though. I'll change it anyway.--Otherarrow 13:08, 29 January 2009 (UTC)

Well even if the votes are biased, the article should still change no matter what it is.
C13g3 -

I was off for a while

25th of december to the 5th of january i was at my grandma's (no internet) on from then my computer was broken. But i've recently (40 mins ago) come into possesion of a new laptop so I should be back from now on. :)

Anything new that I missed

Well, as for rising users, you will see soon enough, as for new things, C13g3 now hhas rollback, and I started tinkering with the character template in my sandbox. And probably something I missed....--Otherarrow 11:31, 31 January 2009 (UTC)

Three people have vandalized me on another wiki, so I'm a bit upset at vandals right now. I should take a small break...Silvie 02:22, 5 February 2009 (UTC)

Also, anyone else notice the recent influx of IP addresses? How many of them have actually become users here?Silvie 03:22, 5 February 2009 (UTC)

where did you get the info about him stealing starlight off Gharnef, that never happed when i played through FE11

what do you think the category for images like 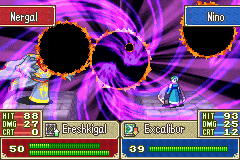 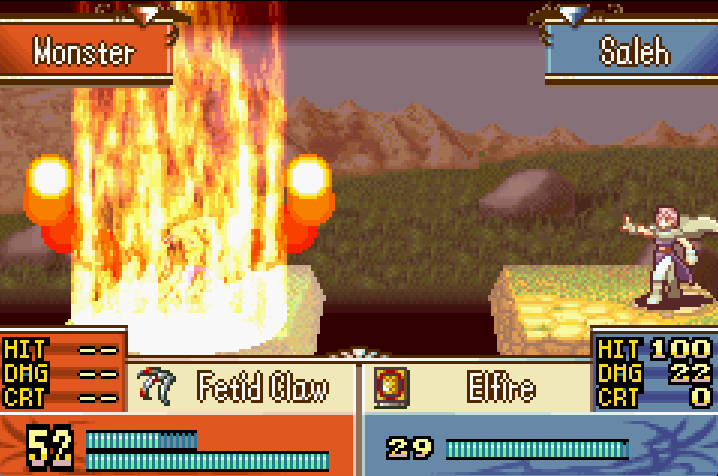 should be, i've been trying to think of names all day but my mind keeps drawing blank.

Hm I guess so, but coudn't that apply to maps aswell?

You could try making a category called screenshots and make subcategories for maps and battle screenshots.
C13g3 -

I saw your message which is why I updated the notes, Since i'm EU myself i'm pretty glad as it makes my job a lot easier.

P.s I moved the FE11 images to Category:Shadow Dragon Images (before they were under the previously used JPN name)

Hey uh, in Shadow Dragon I've discovered this class called Ballistician, as the name implies, a character who mans a moving Ballista.

You don't seem to have this class on here yet though... just wondering, if you would like any help with stuff relating to the game. I've been rather busy lately with life in general but I can help out here if I get some time...

Alright, I think I'll play through the game completely before I write up anything, to ensure the best possible understanding of the topics. The game's lack of compelling plot (which I suppose can be attributed to the game being based on the origanal) constantly annoys me though. The low level of text to wade through will probably shorten a playthrough though... if that is to be considered an upside... Colm 02:02, 24 February 2009 (UTC)

should weapon be what type of weapon the character uses (i.e sword) or the characters starting weapon (i.e Iron Sword).

I'm gonna stick with what weapon type they use and if they can only use one i'll put that down instead.

no doubt you've seen the message about the edit page enhancments

I've seen these so called enhancments on a few other wikis and i personally hate them, I was\wondering what you think of them.

Well tell me what you think when you see the new edit box, personally i'm gonna see if i can edit my own settings to keep the old view up though.

next time can you watch what you undo

I can understand you undoing the weaponbox edit, but i also did a couple of spelling correctons aswel.

p.s please add any other points you have to Template talk:WeaponInfobox

I have a few suggestions for this Wiki.

3) A place that for people who are new to FE, like, one that lists the basics and give hints.

Thanks for replying so quickly!

1) Well, doesn't it say how to on Wikia? Also, if it's anything, lots of Wikias seem to have them nowadays. O.o

2) Where are these userboxes? Also, I don't think I could make them, but I'm sure there's someone here that could!

1)I don't know either. Also, Semaj told me that he tried before and there wasn't much interest, so nvm.

2) Semaj showed me the category ( if you're curious).

I have made the game help page now!

Retrieved from "https://fireemblem.fandom.com/wiki/User_talk:Otherarrow?oldid=30805"
Community content is available under CC-BY-SA unless otherwise noted.