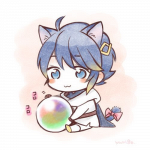 Ah, I see what you're asking. You want me to add a Cipher catergory to charcter pages that don't have one, right?

I don't mean to interrupt, but shouldn't permission be obtained before uploading the pics? I'm concerned since Fandom's Terms of Use says that a user may not submit content that they did not create or receive permission to upload. That's the reason why I didn't do it myself when you asked me. ~ Shaman of Earth ☆ talk ☆ 16:50, October 15, 2016 (UTC)

I don't mind uploading them, but I still do not know how to actually add them to character pages. Shaman has a point. I don't want to start any trouble, so it may be best to wait until we receive permission to do so. ~ SirNeptune (talk) 16:54, October 15, 2016 (UTC)

EDIT: The anon asked Khang about the album art and he said that it's okay to upload it, but be sure to choose Fair Use as their copyright license. Also, remember to give relevant names to files. ~ Shaman of Earth ☆ talk ☆ 20:41, October 16, 2016 (UTC)

Ok, so all I have to do is add the art to each character's gallery, right? I can do that. I'll also keep the bit about Fair Use in mind. ~ Signed by, ~ SirNeptune (talk) ~

Thank you, thank you. I am SO glad that I'm finally done. XD That was quite tedious and took a lot longer than I thought it would. Though the tediousness was mostly my fault for not knowing what I was doing. I made a number of mistakes along the way, but I corrected most of them and got the job done. It was a good learning experience. =] ~ Signed by, ~ SirNeptune (talk) ~

Indeed it was. I especially liked the art depicting both Felicia and Flora and the artwork of Charlotte in a wedding dress carrying whom I assume to be her groom; which is funny, because traditionally speaking, the groom is supposed to carry his bride. XD Yes, I did not know. I was a bit irked when I found out that I had to fix that, but I still did it anyway. It is indeed. Thanks to that, I learned how to edit the galleries in a more efficient manner. ~ Signed by, ~ SirNeptune (talk) ~

Oooh. I also love the art of Charlotte as a Hero because she somewhat resembled Raquesis in that art. It reminded me of how much I love the Hero class in Fates. I also loved the art of Raquesis as well. The one of her drinking tea especially. She looks so elegant in all 3 of them. ~ Signed by, ~ SirNeptune (talk) ~

Fates's incarnation of the Hero class is pretty neat. The one of Raquesis drinking tea has a lion statue in the background, which is an interesting detail. I think it's there because Eldigan is referred to as the Lionheart/Lion King as a nickname. ~ Shaman of Earth ☆ talk ☆ 15:22, October 17, 2016 (UTC)

I agree on both accounts. The class is useful in battle and it looks good. Can't get any better than that. Oh really? That's interesting. I like little details like that. I would like to use it as an avatar eventually. ~ Signed by, ~ SirNeptune (talk) ~

Oh really? Which character would you choose? ~ Signed by, ~ SirNeptune (talk) ~

I excepted as much from you Shaman. As for the anon, I've answered your question in a new topic. ~ Signed by, ~ SirNeptune (talk) ~

Hi, I would like to remind you of the gallery order as written here. We treat Cipher textless character artworks as special artwork, therefore, they should be placed in a correct order, not appended to the bottom of the gallery. Please correct them. -- Khang (talk) 07:43, October 17, 2016 (UTC) Edit: Also make sure to check other page's format first next time if you're unsure. -- Khang (talk) 07:44, October 17, 2016 (UTC)

That... is a bit annoying, but I will correct the mistakes that I have made. ~ Signed by, ~ SirNeptune (talk) ~

I personally love Fates' story. Revelation is my most favorite, Birthright is my second favorite; and Conquest is my least favorite. ~ Signed by, ~ SirNeptune (talk) ~

Eh, revelation is all right until the second half, where things get really messy. Introducing characters we don't care, twists coming out of nowhere and the weirdest dragon that doesn't look great from a top-down perspective, the only saving grace is that azura(finally) gets to live. Birthright is standard. In every moment save for Elise's death, we presence something reminiscent of awakening's plotline. I agree with conquest being the rock bottom. Don't get me wrong, the gameplay is far better than the others, having maps that are worth not only of fe, but of a strategy game. Yet, the story alone seems a reason to ignore this version altogether. From the innumerable plotholes, to the wasted potential moments, such as a possessed takumi, to things just idiotic, like the slime garon, this story is simply the short end of a overstretched concept. However, nothing beats the idiot ball concerning the royals.--177.204.21.147 03:14, October 18, 2016 (UTC)

What do mean by second half? Do you mean a certain chapter? Could you specify which one you mean? I agree with you when you say that Birthright is similar to Awakening. That's probably one of the reasons why I liked it so much. Personally, I found Conquest's harder difficulty to be interesting, but some of the chapters were unnecessarily tedious. You're right. There were so many flaws in the story. Shaman brought one to my attention. When the Avatar ended up in Valla, why didn't Azura tell them anything about it? The fact that Nohrian siblings along with the Avatar and Azura forced themselves to follow Garon's will really annoyed me. What do you mean by idiot ball? ~ Signed by, ~ SirNeptune (talk) ~

I meant after they entered valla. The explanations for the shoehorned children is even worse, alongside the dlc storylines. I not really good at explaining this stuff. Just look at TV tropes.--177.40.62.0 19:30, October 19, 2016 (UTC)

Thanks. Sorry that it took so long to get back to you. I really had to focus on my real life for a bit. That, and I have a younger brother who loves to hog the computer. It seems that a few things have happened during my absence. -- Signed by, ~ SirNeptune (talk) ~

Sorry about my late reply, but ever since Shaman stopped engaging in casual chats, I have to say that I must agree with her. These particular talk pages are meant to be used for discussing matters relating to contributions to the wiki. Not idle banter. I am not trying to say that I do not wish to speak to you, I just don't want to do it here on my talk page. I have not listened to the Drama CDs. -- Signed by, ~ SirNeptune (talk) ~

I will check these pages and see if there are any mistakes. If so, I will do my best to fix them. Edit: I have checked and edited them. I hope that the edits are satisfactory. -- Signed by, ~ SirNeptune (talk) ~

Retrieved from "https://fireemblem.fandom.com/wiki/User_talk:SirNeptune?oldid=384800"
Community content is available under CC-BY-SA unless otherwise noted.