Wyvern Lord
[view]
“Rrrr... Me?! Surely you’ve heard of the Wyvern Generals of Bern? I am Vaida.”
—Vaida talking to Karla in The Blazing Blade

Vaida is a boss character, and later a playable character, in Fire Emblem: The Blazing Blade. She is a brutal general of Bern, who ends up deserting after being accused of insubordination by her superiors. Her Wyvern is called Umbriel.

From what can be told from an ex-comrade, Heath, she is a former commander of Bern, indicating her high rank as a Wyvern Lord. She was known as the "Dragon Fang General" and said to be stronger than the Wyvern Generals. Vaida lost her honor and rank of commander after a Bern general concocted a fake rebellion to enhance his military prestige. Vaida and Heath's unit (which, in a support conversation with Heath, she calls "Vaida's Raiders") was ordered to kill the so-called rebels, who were actually unarmed peasants. Instead of carrying out orders, they attempted to stop the slaughter of innocents; for this, the whole unit was condemned to death by hanging for treason. Vaida ordered the rest of her unit to flee to Lycia while she stayed behind as a decoy; it was in the subsequent fight that she received the scar on her face. She wandered aimlessly until she fell in service with the Black Fang.

Though she has great disdain from many of the veterans of the Black Fang, Ursula, a valkyrie of the Four Fangs in particular, who secretly aided the party in defeating Vaida by giving them a Hammerne staff, she was an interesting specimen to Sonia and Nergal. When it came time to confront Eliwood, Hector, and their companions, Nergal augmented her Spear with his magic, hoping that the ruthless knight would slay the lords. They were mistaken, however, as Vaida quickly tired of the battle and retreated. For her incompetence, she was demoted by Sonia, but was not dealt the Fang's Judgment for she was not an official Black Fang member.

If she survived her encounter with the lords, she returns later on leading a division of Wyvern Riders. Whether she expected to run into Eliwood and the group again was unknown, but she engages them in an instant. Either Eliwood or Hector, however, speaks with the enraged Wyvern Lord telling her about how they saved Zephiel. Vaida, still loyal to Bern, joins the party because of a sense of debt.

After Nergal and his morphs are slain, Vaida returns to Bern to secretly aid the newly crowned King Zephiel. Heath can accompany her if they get an A in supports.

Vaida is incredibly vain and arrogant, always claiming herself superior to others and referring to herself as "The hope of Bern". Even if the odds are placed unfavorably in the enemy's favor, she claims that she will prevail despite the circumstances. But while her personality is off putting to those around her, she came to lend Eliwood a hand in order to prevent Prince Zephiel’s assassination, as she has great faith and loyalty especially for Zephiel and Bern, and places her comrades and Bern above everything else, even her honor.

Even though her personality does not change much upon becoming an ally, watching Eliwood’s party starts to change her opinion on them, since she vows to restore Bern with her former subordinate Heath, and is able to relate to the knight Harken who was in similar circumstances as her.

Vaida appears first as an enemy, her stats greatly enhanced by the use of her famous spear augmented by Nergal, known by the Fire Emblem community as the Uber Spear, which transfers its stat boosts to whoever uses it. She is defeatable, though defeating Vaida that early in the game will require either Arena Abusing, the use of the Mine Glitch, or great tactical prowess, possibly including the death of a party member. However, It is not recommended, as Vaida is a recruitable character later on, wielding an ordinary Spear instead. Through use of the Mine Glitch, it is possible to obtain her "Uber Spear".

As a playable character, Vaida joins very late as the second and last Wyvern-related character attainable, her stats high with stumbling blocks in Speed, Luck, and Resistance. Most of your fliers will probably have surpassed her though due to higher speed, resistance and also higher aid, which is very low for Vaida since she is a female flier with a lot of constitution. Since her avoid is mediocre and her resistance low, she'll also be on a disadvantage when fighting one of the many magic wielders or staff users in the upcoming chapters compared to your other units.

This doesn't change the fact that Vaida has better movement than most other units of your army, can wield numerous weapons without losing speed and possesses great weapon ranks in both lances and swords (actually making her a good wielder of the Brave Sword or the Brave Lance at this point). Combined with her great defensive stats and high strength as well as the fact that bows don't deal too much effective damage, this makes her one of your better units facing strong physical enemies during Sands of Time and Victory or Death, which are also both chapters where she can easily avoid picking up fights with magic users or facing status staff hits thanks to her high flying movement.

Some rumors say that Vaida died at the hands of Bern forces. Others say she now serves Bern's Prince Zephiel.

Though both desired to be together, they could not bring themselves to end their service to their lords, and so they parted ways. That was the last time Harken ever heard Vaida's voice.

“What are you worried about? With me here, we can't lose!”
—Final Chapter Quote

If, as a boss, she fights HeathEdit

Vaida is illustrated in the trading card game Fire Emblem Cipher with the following cards: 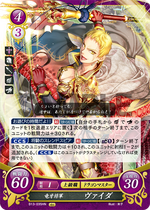 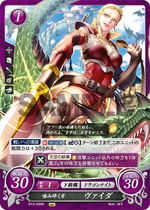 Vaida as a Wyvern Lord in Fire Emblem 0 (Cipher).

Vaida as a Wyvern Rider in Fire Emblem 0 (Cipher).

Vaida's portrait in The Blazing Blade.