Kyle Hebert
[view]
“I’ll admit, there are times when the pain’s so bad it leaves me numb. But that’s because I was so damn happy when I was with ’em. It’s all an even balance, you know? I got good enough for all the bad. Anyway, I avenged them, so there’s no point in hanging on to hate.”
—Valbar to Leon in Shadows of Valentia

Valbar (Valbo in the Japanese version) is a playable character in Fire Emblem Gaiden and its remake, Fire Emblem Echoes: Shadows of Valentia. He is 31 years old.

Valbar lived in a small village on the coast with his parents, his sister, his brother, and his wife and son. He became a Zofian knight in order to support his family financially. However, while he was serving his duty elsewhere, Barth's pirates attacked the village, killing his entire family. With his sworn brother Leon and Kamui the mercenary, he sought out and fought against Barth. While he was waiting for his chance, Celica's party lands in the middle of their fight and began fighting them as well, so they joined forces to beat Barth. When the battle ends, Valbar felt a debt of gratitude towards Celica for having helped him fulfill his revenge, and sets out on her journey with her, with his group following along.

After the war, he was given the role of training new recruits of the Kingdom of Valentia's Brotherhood of Knights at Alm's request alongside his companion, Leon. Thanks to his personality, he happily spent his later years surrounded by many people.

With his big heart and carefree demeanor, Valbar believes in repaying his debts, and believes in living his life without regrets. He’s good at taking care of others, but is also headstrong and tries to do so with no regards of the consequences.

Valbar is close friends with Leon, a former Zofian soldier who was able to enjoy life again thanks to Valbar. Leon has romantic feelings for Valbar, but Valbar appears to be oblivious in their supports. It is mentioned their relationship never faltered, even when Leon retired from training soldiers.

In Chapter 2, if he survived the battle at the Pirate's Fortress, talk to him within the fortress.

Valbar is an above average unit, and he fills an important role in Celica's route when you obtain him. Early in Celica's route, Saber will act as your tank to block off choke points since the rest of her party is filled with Mages. When you obtain Valbar, he takes over Saber's role and does a better job since the Armor class provides far superior base Defense, Strength, and HP when compared to the Mercenary class.

For a Soldier/Armor, Valbar's growths are actually quite good compared to Lukas and Forsyth, as he winds up as a balanced Armor. He will prove useful as a tank for Celica's route, as her party is Mage and Mercenary heavy. However, he will have sometimes have trouble on the offensive unit due to his low Move, as no one in Celica's group learns the Warp skill. Thus it is recommended to have the enemies come to Valbar instead, or to eventually send Valbar to Alm's party. Valbar will do well in desert maps, such as on the route to Grieth as all non flying units will be reduced to one movement, making his movement the same as the rest of the army.

Valbar is again, the only armored unit in Celica's route (barring villager's forks and Atlas), and serves his role as the main tank of the party. He is very good at his job, coming with high bases in strength, defense, and HP while starting with lower skill, speed, luck, and 0 res. And his growths support his role, with high strength, skill, defense, and HP while having mediocre speed and bad luck. He will continue to serve his role throughout the game, but he might fall off near the end due to fighting more and more magic users. His reclass options are not that appealing, but he would make an extremely bulky Dread Fighter, but the abundance of mercenaries in Celica's route means you might not want more of them. He also might perform well as an archer, with a high enough skill growth to hit often and the strength to deal damage. All in all, Valbar is a great early game tank, and serves his purpose throughout the game.

Open and Honest
A knight from Zofia who accompanies Celica after she rescues him. Appears in Fire Emblem Echoes: Shadows of Valentia.

"On Alm's request, he instructs young soldiers in the ways of war."

"Valbar joined the One Kingdom's Brotherhood of Knights at Alm's request, where he worked to train the next generation. Well-loved for his open and honest nature, he spent his years happily surrounded by friends and admirers."

“Sorry 'bout that. You helped us out there. Ahh, I owe ya one now. Wherever you go, I'll go along with. I look forward to it!”
—Valbar's recruitment conversation
“I have lived my life without regrets...”
—Valbar's death quote

Valbar is illustrated in the trading card game Fire Emblem Cipher with the following cards: 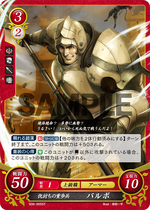 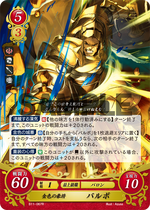 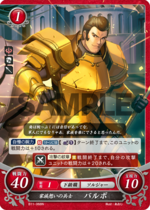 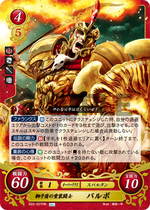