Kyle Hebert
[view]
“Human bonds are leaves in the wind. They offer you nothing.”
—Validar

Validar (Valldar in the non-English European versions) is an enemy character and the secondary antagonist in Fire Emblem Awakening.

Validar is the leader of the Grimleal, the religious sect worshiping Grima in Plegia, and is trying to expand Plegia by force. Validar's main goal is to resurrect Grima as his forefathers had tried, albeit unsuccessfully. Like his forefathers, Validar was born in hopes of being a suitable vessel but, also like them, he too was unworthy. Eventually, Validar had a relationship with an unknown woman, presumably to continue Grima's lineage. This ultimately accumulated in the birth of a child who finally had the Heart of Grima symbolized by the Mark of Grima on their right hand. However, fearing for her child's future, the woman took the baby and left Plegia to protect them. Validar spent many years afterwards searching in vain for his child.

At some point before the events of Awakening, Validar found an ordinary village girl who possessed a special power. Wanting to use this power for himself, he brainwashed the girl into making her think that he saved her from the slums. The girl's name eventually changed to Aversa. To ensure his spell would not waver over her, Validar had the village destroyed and killed anyone who had connections to her.

The night after Gangrel declared war between Plegia and Ylisse, Validar led several Grimleal members (and hired Gaius) in an assassination attempt on the Exalt Emmeryn. However, "Marth" warned Chrom and Lissa of the attempt and they managed to rally the Shepherds to defend her. Gaius changed sides after learning the true intention of breaking into the castle. Validar also spotted his child during the attack, and was delighted to see them again. However, it appeared to be short-lived as he was slain, though his identity was never revealed and he was assumed to be an assassin sent by Gangrel.

Validar found himself in the dark void where he was greeted by an entity who was preventing him from truly dying. Validar recognized the entity as the Fell Dragon Grima. Grima kept Validar alive in the void until Gangrel's supposed death, and returned him to the human world.

With Gangrel's death, Validar took the throne of Plegia and became its new king. Two years after the war, Chrom was forced to come to Plegia to speak with the new king regarding the Valmese invasion. Validar allowed Chrom to take all the funding and ships he needed, but does not give him any soldiers, claiming that his country is still under disarray. He also introduces his hierophant, a mysterious hooded figure who, upon taking off their hood, matches Robin in appearance. However, with their business done, and not wanting to stay any longer, Chrom and Robin leave. That night, Validar appears to Robin in a vision and reveals that he is their father, but does not stay too long as Chrom appears after their conversation. He also sends a group of Risen to kill the group and capture Robin, but his attempt fails.

After Walhart's defeat, Validar hears of Chrom's search for the final gem for the Fire Emblem and sends word for him to come to Plegia so he can formally present the last gem. However when Chrom and his army arrive, he betrays them and tries to steal the Emblem. Just as they are about to escape, Validar warps in, weakens Chrom, and controls Robin into making them give the Fire Emblem to him. After acquiring the Fire Emblem, Validar orders Algol to kill them, while warping away to the The Dragon's Table to start Grima's Awakening.

After defeating Aversa, who was sent by Vaildar to stall them, Chrom's army confront Validar at the Dragon's Table, Validar separates Chrom and Robin from the rest of their army to deal with them personally. After being defeated, he watches as Robin "kills" Chrom and relishes in delight, knowing that his plan has succeeded. He taunts Lucina about how the future is always set and will never change. Basilio appears and shocks Validar, as he thought that the Khan had died in his battle with Walhart. Basilio explains that because of Lucina's message, he decided to feign death and tells him that he carried his part of the plan while avoiding the spies he had placed to watch the army. Basilio also tells him that Robin had known of Validar's plan from a premonition and how the gems on the Fire Emblem were fakes. As Validar attempts to reign control of the situation, he is attacked by Robin and Chrom gets back on his feet and with his master plan ruined, decides to kill them all. After being defeated one last time, he asks Robin why they would squander their birthright to become Grima's vessel before dying for good.

In Fire Emblem Warriors, Validar is pulled into Aytolis, where he joins forces with Oskar, the king of Gristonne, as well as Gharnef and Iago. He leads a portion of the Gristonne forces and attempts to stop the Aytolisian royals, but is thwarted and driven back. Later, with the defeat of Velezark, he is returned to his own world.

Validar is a man fully devoted to his role as the leader of the Grimleal and one of the descendants of the Fellblood. As the leader of the Grimleal, he is extremely loyal to Grima and is willing to do whatever it takes to ensure his liege's resurrection, even at the cost of his own life. This fanatic loyalty of his has seen Validar committing acts of a grievously heinous nature, some of the more prominent including murder and brainwashing. Aversa is an unfortunate victim of his cunning schemes, having been kidnapped and brainwashed at a young age to serve Grima.

Validar appears to have no goals or desires of his own, aside from serving the ambitions of Grima. This is especially evident through his unfazed response to the knowledge that the Fell Dragon's resurrection will inevitably lead to his death. Validar's fanaticism is so great that he does not appear to understand why his child is unwilling to become Grima's vessel.

Because of his fanatic belief in the impeccably constructed nature of his "destiny", Validar is often overconfident when executing tasks for Grima. This proves to be an inherent flaw of his, as he has, time and again, made critical mistakes when the events that happen deviate from his foresight.

“A dark mage who wishes to be the architect of the world's end.”
—Help Description

Validar appears in Super Smash Bros. for Nintendo 3DS and Wii U in the 3DS version as a collectible trophy. His trophy resembles his official art for Fire Emblem Awakening and the glowing circle bears the same pattern as the Warp Powder that the Black Knight uses and subsequently, the warp that Ike and Marth use in their Super Smash Bros. Brawl appearances.

Validar is illustrated in the trading card game with the following cards: 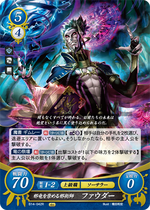