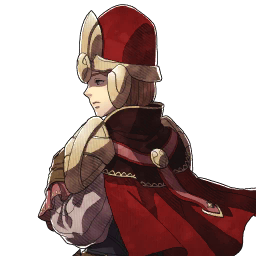 Faith(FE16) |skills = Canto
Sol (Mist only)
Rally Resistance (FE13-14)
Dual Support+ (FE13 only)
Inspiration (FE14 only)}}The Valkyrie (ヴァルキリー Varukirī) is a horse-mounted combat and support magical class that recurrently appears across the Fire Emblem Series, beginning from Fire Emblem: The Binding Blade. The standard promoted form of the Troubadour class, Valkyries wield Staves as their primary equipment of choice for support purposes. They wield magic tomes for combat purposes, though the exact type of weapon varies depending on the title that they appear in.

In Fire Emblem: Genealogy of the Holy War and Fire Emblem: Thracia 776, Troubadours promote into a version of the Paladin class that is outfitted with Swords, Lances and Staves. Presumably to avoid confusion with the regular Paladin class, this class is later replaced/renamed.

Valkyries make their first formal appearance in The Binding Blade and return in the same capacity in The Blazing Blade, where they are the sole promotion of the Troubadour class and wield Anima magic alongside Staves.

In Fire Emblem: The Sacred Stones, Valkyries are armed with Light magic instead of Anima Magic, acting as not just one of the promoted forms of the Troubadour class, but also that of the Cleric class.

In Fire Emblem: Path of Radiance and Fire Emblem: Radiant Dawn, Mist is the only playable Valkyrie ( Varukyuria). She can promote into this class from the Cleric class and wields both Swords and Staves as her equipment of choice, similar to the female Paladin from the Jugdral titles. Oddly, the Valkyrie class does not count as a horse-mounted class in this title, and is thus immune from sustaining effective damage from horse-slaying weapons like the Horseslayer.

With the onset Awakening and Fates, the Valkyrie class is reverted to how it functioned in The Binding Blade and The Blazing Blade, where it is one of the promoted forms of the Troubadour class and is armed with Tomes and Staves as its equipment of choice.

In Fates, the Valkyrie class is made unisex for the first time in the series, and has thus been appropriately renamed to Strategist (ストラテジスト Sutoratejisuto). Strategists are treated as a Nohrian class in this title.

In Fire Emblem Warriors, the class reappears, still under the name Strategist. This version can use tomes and acts as a clone of the Dark Crusader class.

The Valkyrie class makes a return in Three Houses as a female-exclusive DLC class. A character must be level 20 or higher to take the Certification Exam using an Underground Seal. The recommended level requirements are B or higher in Reason and B or higher in Riding. The class gives bonuses to Reason, Riding, and Swords, and Faith.

Valkyries are usually deployed as healers, but their fairly decent Magic can also be used for combat purposes. As they are battle maidens on horseback, they can move more spaces than Bishops can. Because of this, they are well equipped to support a fast-moving army without damaging the player's tempo, or to rush to the aid of far-off units in need of healing. Alternatively, if healing is not required, Valkyries can be effectively utilised for offensive purposes. Charges often depend on their ability to finish off most of the nearby enemies during the player phase, so this degree of flexibility is a welcome improvement over the likes of Troubadours and Clerics.

Stat-wise, Valkyries are similar to Bishops, save for their superior Speed and inferior Resistance. Valkyries can be used as a way to absorb hits from opposing magic units, but will often have trouble disposing of them on their own, especially ones that are fast enough to avoid getting doubled. Valkyries are thus best used to safely lure opposing mages into traps, or to protect their allies from enemy mages.

Valkyries are not without their weaknesses. As they typically promote from Staff users, they will usually start off using E-rank tomes, which hinders their otherwise decent magical offense. While they will generally inflict impressive damage to non-magical opponents that they can perform double attacks on, this is typically offset by their extremely poor defenses. This vulnerability causes them to risk being killed in just a few enemy onslaughts.

In Norse mythology, Valkyries were warrior-maidens and the handmaidens of Odin. They rode through battlefields (either on horseback, wolves or by flying) and brought the worthiest warriors among the slain to Valhalla, the heroes' heaven. They are associated with both ravens and swans. The name "Valkyrie" means "chooser of the slain."

Concept artwork of the Valkyrie class from Awakening. 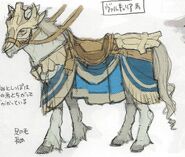 Concept artwork of the Valkyrie mount from Awakening.

Concept art of a male strategist from Fates 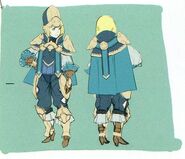 Concept artwork of the Strategist class from Fates.

Generic class portrait of the Valkyrie class from the GBA games. 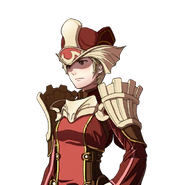 Generic class portrait of the Valkyrie class from Awakening.

Critical animation of Cecilia as a Valkyrie from The Binding Blade. 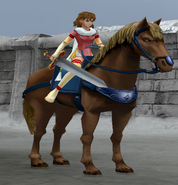 Battle model of Mist, a Valkyrie from Path of Radiance.

Battle model of Mist, a Valkyrie from Radiant Dawn. 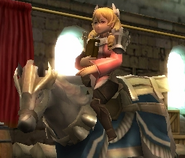 Battle model of Maribelle, a Valkyrie from Awakening.

Battle model of Elise, a Strategist from Fates.

Elise as a Strategist in Fire Emblem Warriors.

Map sprite of the Valkyrie class from the GBA titles.

Map model of the Valkyrie class from Path of Radiance.

Map model of the Valkyrie class from Radiant Dawn.

Map sprite of the Valkyrie class from Awakening.