1
[view]
“This staff here? It's magical and can return life to those who have passed on already.”
—Claud

In Genealogy of the Holy War, this staff is introduced by Claud when he exits the Bragi Tower with Tailtiu in Chapter 3. When Tailtiu asks if the staff can resurrect her "sweet grandma", Claud tries to explain its limitations before being interrupted by the battle. The Valkyrie Staff will be passed into the hands of Claud's descendants, provided that they possess major Bragi Holy Blood.

This staff appears to be the Jugdral Series' version of the Aum Staff, which possesses the same ability to resurrect a single ally unit before breaking.

The Valkyrie Staff is the only one of the twelve holy weapons of Jugdral that didn't appear in Awakening, although the Fortify staff's weapon model in Awakening bears it's design, minus the tassels.

** May only be used within the Home Castle of the given chapter.

The Valkyrie Staff, as it appears in the third series of the TCG. 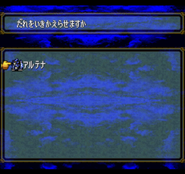 The menu screen that is displayed when selecting the character to be resurrected in Genealogy of the Holy War. 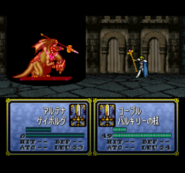 Coirpre resurrecting Altena with the Valkyrie Staff in Genealogy of the Holy War.