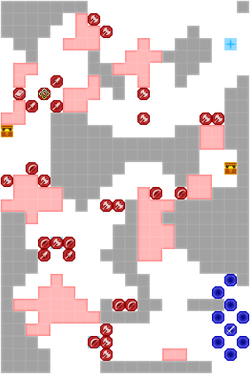 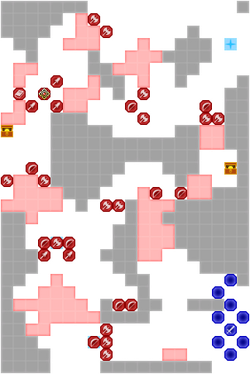 Chapter script
[view]
“Having repelled the Imperial vanguard, the resistance army, in desperate need of troops, seeks help from Judith, head of House Daphnel - the governing body in the northwestern regions of Alliance territory.”

Byleth finds Seteth and Flayn in the Holy Tomb, and Flayn theorizes that Rhea may have fallen into a coma just like Byleth did. The next day, Judith responds to the Resistance's request and agrees to meet them at Ailell, the Valley of Torment, to reinforce them. The group begins to prepare for the journey, unaware that an Imperial spy has witnessed the conversation.

At the end of the month, the Resistance Army journeys to Ailell, but is ambushed by soldiers of House Rowe, one of the houses that betrayed Faerghus for Adrestia. The Resistance engages the traitors in battle, and is eventually reinforced by Judith. Together, they rout the enemy.

Afterwards, Judith delivers the Alliance soldiers as promised. She gives the group a letter from Claude and reveals that Rhea was captured by the Empire after the Battle of Garreg Mach. After returning to the monastery, Seteth decides that they will capture the Great Bridge of Myrddin to gain a foothold in the Empire. Byleth reads Claude's letter; he offers to draw House Gloucester's Imperial loyalists away from the bridge so the Resistance can capture it, cutting Gloucester off from the Empire and allowing Claude to restore stability to the Alliance.

Enemies spawn at the start of the enemy turn.

For routes other than Azure Moon, if Ashe was recruited before the end of Chapter 12, he can be re-recruited here by defeating him, then choosing to spare him - in this case, he will join at the end of the chapter. If Ashe had fallen in battle during the academy phase in Classic mode, however, his generic replacement will show up instead, losing the opportunity to re-recruit him.

This map appears to give you two routes to approach the boss at first glance, with a treasure chest on either path, but the choice is made for you on turn 6 when Judith arrives in the northeast corner of the map. She and her two accompanying Armored Knights are immediately threatened by enemy reinforcements hot on her tail, and the boss will start approaching her as well, putting your chances of victory at risk if you did not send enough forces in that direction. The Bolt Axe from the chest in that direction is also arguably more interesting than the Silver Shield contained in the chest near the boss, as well as being significantly easier to obtain without needing to wade through a steady flow of enemy reinforcements, so it is much easier to send your forces in that direction if you can't afford to split your group in two.