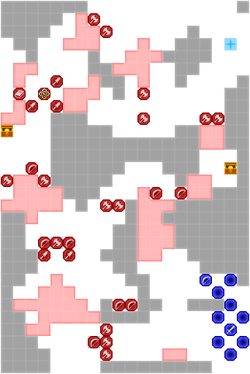 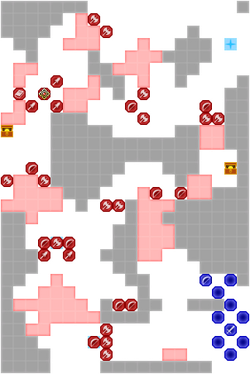 Chapter script
[view]
“Openly marshaling soldiers within my territory could provoke other members of the Alliance. Therefore, I will secretly gather troops in Ailell, the Valley of Torment.”
—Judith via letter to Claude

Valley of Torment is the third chapter of the Verdant Wind route, accessed when Byleth chooses the Golden Deer house.

Judith agrees to provide reinforcements to Byleth and Claude to assist in the fight against the Empire. However, to avoid provoking infighting amongst the members of the Alliance, Judith suggests that they meet at Ailell, the Valley of Torment, where she will be able to provide the reinforcements.

When they get there, Marianne talks about a legend that occurred there concerning the goddess. Before she can explain further, the knights of House Rowe show up. Unable to escape a fight, they battle and rendezvous with Judith.

After the fighting has ended Judith formally joins with the army, teasing Claude in the process.

On turn 6, Judith will arrive with 2 armored knights. She has to stay alive in order to beat the chapter.

If Ashe was recruited before the end of Chapter 12, he can be re-recruited here by defeating him, then choosing to spare him - in this case, he will join at the end of the chapter. If Ashe is killed during the academy phase in classic mode, his generic replacement will show up instead, losing the opportunity to re-recruit him.