Imari Williams
[view]
“I've no use for these bloodless minnows... Give me prey that will sate my bloodlust... I hunger!”
—Valter

Valter is a boss character from Fire Emblem: The Sacred Stones. Also known as the Moonstone, he is one of the strongest generals in Grado's Imperial army, both in the past and the present.

Valter is a sadistic Wyvern Knight who wields his Lance with unsurpassed skill and strength. He was part of the Imperial Three alongside Duessel and Glen; however, he was eventually fired by the Emperor for the mistreatment of innocents and slaughtering of surrendered opponents. When Vigarde was revived by the Dark Stone, Lyon reinstated him as a general alongside Caellach and Riev.

The support conversations with Duessel and Cormag reveal that Valter was a more "modest" man (as Duessel puts it), still arrogant, but not as psychotic as he came to be. However, in an unspecified battle, Valter broke his lance and somehow managed to acquire Duessel's cursed lance that would only be used when madness ruled the world. When Duessel realized that Valter had taken the lance, he snatched it from his arms, but it was too late, as Valter's mentality was completely destroyed with a significantly increased desire for bloodshed and slaughter.

Valter is present during the siege of Castle Renais, in which he and 4 Wyvern Rider sentries patrolled the area. He spots Eirika and Seth escaping from the castle. He then proceeds to attack Seth, giving him a serious wound in his arm. Seth and Eirika then run to the Renais-Frelia border area, where he allowed them to leave so he could savor the "hunt".

In Chapter 5x, Valter is seen speaking with his adjutant Tirado. Tirado has a plan to capture Ephraim; leave the castle lightly guarded with a few soldiers, and surround them when he and his band seize the castle. Valter allows Tirado to carry this plan out, and when the rebels seize the castle, the trap has already been sprung. Valter confronts Ephraim and demands him to "grovel" like a dog to be spared. Much to his surprise and anger, Ephraim and his men break out of the trap.

In Ephraim's route Valter is seen at Bethroen, where he has Selena return to the capital after relaying news that the Emperor suspects her of treason. Mildly annoyed that they haven't started the battle yet, he leaves the Ranger Beran to finish Duessel and his group off before heading towards Carcino, where he kills Glen.

In Eirika's route Valter confronts Glen, accusing him of being a traitor after the latter lets Eirika and Innes pass to Caer Pelyn. Valter states that he opposes peace and wants an endless war, dueling and killing Glen. He later has his two accompanying soldiers chase after Glen's wyvern to prevent it from alerting Cormag of his treachery. Valter brings Glen's mangled corpse to Cormag and states that Eirika killed him. An enraged Cormag heads to Hamill Canyon to avenge his brother. However, upon seeing that Eirika is not who Valter portrayed her as, Cormag defects and joins her group so that he may kill Valter.

Valter is later seen in the Jehanna plains where he and Caellach attempt to kill the Renais siblings.

On Eirika's route, should Cormag confront Valter, Valter taunts him, believing him to be just as weak as his brother. On Ephraim's route, Valter does not mention killing Glen, instead simply accusing Cormag of being a traitor. Regardless, he falls in the ensuing battle.

In Creature Campaign, Valter is unlocked by beating the seventh floor of the Lagdou Ruins.

Valter's stats are not as high as the characters recruitable from the story, but he can still be a passable unit in Creature Campaign. However, his luck is very low, and his skill and speed stats are only average, so he might have problems hitting or dodging. Despite this, he has a good amount of HP to soak up a few enemy attacks, along with having a second Fili Shield to deflect arrows. So while he is not the best of characters, all he needs is a bit of attention towards that luck rating in order to help him with his weaknesses.

When fighting against Valter as a boss, it is important to remember that his class possesses the skill "Pierce." There is a reasonable chance that his attacks will inflict more damage than what the battle calculations suggest, and this chance cannot be mitigated through luck, supports, or the use of the Hoplon Guard the player likely obtained from Caellach. His Fili Shield can technically be stolen, leaving him heavily exposed to archers, but doing so requires the use of Rennac or a well-raised Colm. Thieves with a speed below 17 or, in hard mode, 18 need not apply.

Dark Moonstone
One of Grado's six generals. Cruelty intoxicates him. Known as Moonstone. Appears in Fire Emblem: The Sacred Stones.

Valter is illustrated in the trading card game Fire Emblem Cipher with the following cards: 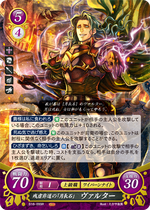