Vanessa is a playable character from Fire Emblem: The Sacred Stones. She is one of of the Pegasus Knights of Frelia and Syrene's younger sister. She has a crush on her prince, Innes.

Along with Moulder and Gilliam, Vanessa is one of the three soldiers who joins Eirika's army receive when she reaches Castle Frelia. King Hayden calls them a group of trusted soldiers.

Vanessa admires her sister's ability, though it turns out Syrene admires Vanessa's ability to remain calm and collected in the most hectic situations. She befriends Lute, the self-proclaimed prodigy, despite the fact that their A support conversation starts out with Lute trying to attack Vanessa's Pegasus, Titania.

Romantically speaking, she may also form feelings for Forde, though she commonly scolds him for falling asleep in battle. It is revealed that she does love someone, for in her A support with Syrene, she tells her sister that she is also fighting this war for the man she loves. Syrene tells her after the war to have the man she loves come and eat with them. In her supports with Moulder, he notices her crush on Innes and encourages it by first telling her the story about Innes's earlier archery feats, then openly telling her to speak to him.

Vanessa is a sincere, honest and honorable knight of Frelia. She takes her work very seriously and as Forde says, "needs to loosen up." She is calm even in the craziest situations, and is slightly envious of her sister's relaxed personality. She tends to take things seriously, and can never tell when the people are joking or being truthful. She has a dry sense of humor, and often scolds Forde for falling asleep in battle. However, she can be slightly mischievous at times, as seen in her A support with Lute, where she convinces her that the wings of a thousand pegasi act as an extremely potent aphrodisiac. She is good friends with Lute and Moulder, who acts as a father figure to her.

Vanessa is level-headed and always does the right thing. In a support with Syrene it is revealed that when their father suddenly got sick, Syrene and their mother panicked and did not know what to do, but Vanessa just knelt down and started to gather nuts in her hands, went off and sold them, and came back with medicine for her father. It is also revealed that she is always trying to be like her sister but can never seem to catch up with her, to which her sister replies she has always wished she could be more like Vanessa with her calmness even in the middle of crisis and battle.

*12 in the Japanese version

Much like Florina and Shanna, Vanessa is the very first flying unit that is made available to the player, and as such, she is one of the most important units in the game. Her early flying utility gives her a niche in ferrying characters and items across the battlefield with ease, and her incredible mobility allows her to target objectives other units cannot reach. Making careful use of Vanessa is essential in making the early game far quicker and easier than it would otherwise be, which makes her one of the best units in the game as a result.

Like most fliers, Vanessa's stats are most focused on her Speed, Skill, and Luck. Her Strength and HP are low however, and she does have issues dealing the multitude of brigands in the earlier chapters due to her weapon triangle disadvantage. Despite this, Vanessa is very worth leveling, as her flight and good growths will enable her to become a very versatile combat unit even in late game. Though her long term stats are lower than Tana's, her higher availability allows her to gain a noticeable level lead.

Her two promotion options are Wyvern Knight and Falcon Knight. As the former, she gains the Pierce skill, and gains +4 Con to offset the weight of lances, making her a better combat unit. As the latter, she gains the ability to use swords in addition to lances, but gains them at a very low E rank that restricts her to Iron Swords for a while. Falcon Knight does, however, grant her better Aid, making her a better supporter. In the end, the promotion choice should depend on how well Vanessa developed her Strength (which greatly affects her combat capabilities since her base Strength is low) and on how much does the player desire her rescue-dropping capabilities. She can also take part in a Triangle Attack along with Tana and Syrene but if Vanessa promotes into a Wyvern Knight only she can initiate it. It can, however, be a hassle to set it up consistently and that along with Syrene’s late join time make the Triangle attack more of a bonus for players that gravitate towards fliers in this game.

“I am yours to command, Your Highness.”
—Vanessa speaking to Eirika at the start of Chapter 7

Vanessa, Dutiful Rider (気丈な緑翼 Kijōna Midori Tsubasa)
"She remained on active duty as an airborne knight in Frelia's army. Her beauty and determination became the standard to which her fellow knights aspired."

A Support with Innes
"At Innes's request, Vanessa moved into Castle Frelia where she continued her duties as a knight of the realm. Thereafter, they had a child and lived happily with the blessings of all around them."

A Support with Forde
"Forde's love for Vanessa grew after the war, and although she loved him as well, she placed her duty to Frelia first. Undeterred, Forde moved to Frelia himself. Over time, the two were wed."

A Support with Syrene
"Sisters Syrene and Vanessa returned to Frelia after the war for a long-overdue talk. They talked of love and war, of friends now gone. Together, they renewed their bond as siblings and vowed never to let that bond fail."

Vanessa is illustrated in the trading card game Fire Emblem Cipher with the following cards: 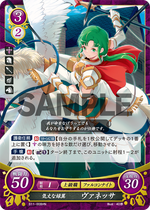 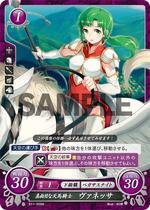 This name was invented by Irish author Jonathan Swift by rearranging syllables in the name 'Esther Vanhomrigh,' one of his friends. 'Vanessa' is now the name of a genus of butterfly. There is an opera called Vanessa about a woman so named, who is deserted by her lover Anatol. Anatol's son, also called Anatol, seduces and impregnates Vanessa's niece, Erika. Then the young Anatol and Vanessa marry and depart, leaving Erika behind.

Vanessa as a Falcon Knight in Fire Emblem 0 (Cipher).

Vanessa as a Pegasus Knight in Fire Emblem 0 (Cipher).

Vanessa's portrait in The Sacred Stones

Vanessa performing a critical hit as a Pegasus Knight. 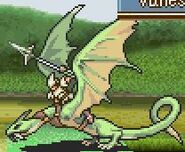