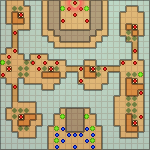 Fuga (End of chapter, if My Castle has a level 3 Hot Springs)

Chapter script
[view]
“Corrin's hopes are finally answered—the royal siblings of Hoshido and Nohr join together. They descend on Valla, where a great evil awaits them...”
—Opening Narration

Veiled Kingdom (見えざる王国 Miezaru ōkoku lit. The Invisible Kingdom in the Japanese Version) is Chapter 18 of Fire Emblem Fates in the Revelation Version. This chapter takes place in Floating Isle.

Warning: This chapter marks the only time in the Revelation route that a playable character dies and permanently leaves the army and has no circumstances to avoid it.