Angela Marie Volpe
[view]
“Even as a wolf, I much prefer being alone. Besides, Daddy is the only transforming friend I need.”
—Velouria

Velouria is a playable character in Fire Emblem Fates. She is the daughter of Keaton.

Velouria is the daughter of Keaton. Like the other children of Fates, Velouria was placed in the Deeprealms to spare her from the war.

In her Paralogue, Velouria is busy picking acorns, hoping to find the shiniest one to present to her father. She ends up wandering near the portal out of her Deeprealm where she picks up her father's scent. She decides to go out and find him, only to find invisible invaders in the middle of a battle against her father and his friends. She eventually finds Keaton and joins in the battle. After the battle, Velouria believes that Keaton set up the battle as a "game".

Keaton attempts to downplay his happiness in seeing his daughter, but Velouria picks it up thanks to his tail wagging. Keaton attempts to send her back to her Deeprealm, but Velouria refuses, wanting to join Keaton's "pack". Though Keaton continues to refuse, she presents a shiny acorn that she found. Keaton is impressed by the present and gives her a gift that he found himself; a bat carcass. Velouria is equally happy for her gift and her happiness is enough to convince Keaton to let her join the army.

Velouria is moody, fluctuating on a whim and has a wicked tongue when annoyed. Her mood can be difficult to read and does not express her emotions visually in an obvious manner, but will make her desires known vocally if pushed. She can be lazy, and is uninterested in other people, but will instantly perk up if an opportunity to collect trinkets are involved. If she covets something and is denied, she can act cold or ruthless in her pursuit to acquire it, sometimes even attacking the perpetrator. She has many natural Wolfskin traits such as cannibalistic attitudes, ferocity in battle, and is a forager, eating just about anything she comes across no matter how old the item may be. She also has a keen sense of smell, even when compared to most other Wolfskin

She is particularly fond of her parents though. She is clingy to Keaton and when he tries to have her tone it down by putting a restraining order, she claims that it is "as worse as death for her". Nonetheless, she knows how to butter up to Keaton by presenting a few interesting things she finds. She loves her mother, particularly her flowery scent, and initially wants her to leave the war so she will have more opportunities afterward to spend with her as it is Wolfskin tradition to leave one's parents after reaching a certain age. The two develop a mutual understanding of staying in the war and she takes every opportunity to cuddle with her mother during downtime between battles.

Velouria shares many traits with her father, particularly in her habits of collecting random items, amassing a large "treasure trove", but also resulting in the messiest room in the army. From random plant items, animal carcasses, fur balls, and plain garbage, she hoards anything she finds interesting, particularly to show off to Keaton. .

*Velouria will receive whatever secondary class that Corrin has access to if she has achieved an A+-Support with her.

*Velouria will receive whatever secondary class that Corrin has access to if she has achieved an S-Support with him.

As the daughter of Keaton, Velouria is a member Wolfskin tribe and inherits Keaton's bases. As such, she inherits his strong physical bulk thanks to a strong HP and Defense growth alongside of a great Strength base and growth to hit hard with each blow. Compounded with a middling speed growth and Velouria has great capabilities as a frontline physical tank. However, she inherits his poor resistance, leaving her vulnerable to Diviners and other Tome/Scroll users. She also has a poor Skill growth inheritance, making it her base hit and critical hit rates low and a bit of trouble activating offensive skills. She is well suited for her class, and depending on her mother, she can correct her flaws or enhance her strengths. She does need to be careful of anti-Beast Unit weapons as she retains her Beast Unit status regardless of her current class. Her personal skill Goody Basket gives her a 10% HP generation if it activates, giving her a little bit more survivibility depending on her Luck stat.

She starts off with both of her Wolfskin skills, Odd Shaped, increasing her damage by 4 during odd numbered turns, and Beastbane, which makes her an Beast Unit killer. Her sole promotion is the Wolfssegner, which boosts her strengths even more, but stays relatively the same. Her first class skills is Better Odds, giving her a 40% HP regeneration every odd number turn which in tandem with her Personal Skill can lead to a 50% HP regeneration every other turn. Her second is Grisly Wound, removing 20% of the enemy's HP that she has battled, making her a good option for whittling down particularly bulk heavy units.

Renewed Wolfpup
A young woman of the wolfskin tribe. In high spirits and elegant clothes for the New Year. Appears in Fire Emblem Fates.

Velouria is illustrated in the trading card game Fire Emblem Cipher with the following cards: 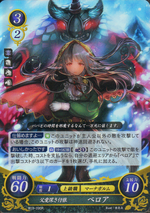 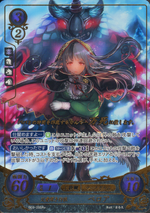 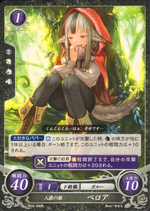 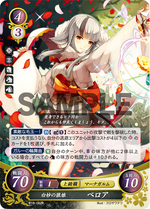 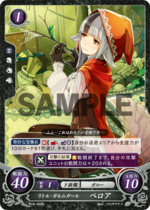 Velour is a type of fabric, keeping the naming pattern of all beast shapeshifters in the series.

In Georgian, "velouri" means savage and the "a" suffix would translate "Velouria" as "he/she is savage", which would be fitting with the wolfskin.