Wolfskin
[view]
“Even as a wolf, I much prefer being alone. Besides, Daddy is the only transforming friend I need.”
—Velouria

Velouria is the daughter of Keaton. Like the other children of Fates, Velouria was placed in the Deeprealms to spare her from the war.

In her Paralogue, Velouria is busy picking acorns, hoping to find the shiniest one to present to her father. She ends up wandering near the portal out of her Deeprealm where she picks up her father's scent. She decides to go out and find him, only to find invisible invaders in the middle of a battle against her father and his friends. She eventually finds Keaton and joins in the battle. After the battle, Velouria believes that Keaton set up the battle as a "game". Keaton attempts to downplay his happiness in seeing his daughter, but Velouria picks it up thanks to his tail wagging. Keaton attempts to send her back to her Deeprealm, but Velouria refuses, wanting to join Keaton's "pack". Though Keaton continues to refuse, she presents a shiny acorn that she found. Keaton is impressed by the present and gives her a gift that he found himself; a bat carcass. Velouria is equally happy for her gift and her happiness is enough to convince Keaton to let her join the army.

Velouria loves everything about her parents, particularly her father, to the point that it is almost obsessive and clingy. This obsession is so strong that, when Keaton tries to put a restraining order on her, she says that it is, "a punishment every bit as bad as death". Her love for her parents is so strong she even tries to send her mother away so that she does not get claimed by the war. Although, this obsession isn't without its reasons. Once she is an adult, she will be forced to leave due to wolfskin tradition so she wants to spend as much time with her parents as possible and, because of the war, she keeps fighting to prevent that time from coming sooner. Another reason is because she wants to compensate for all the lost time she spent in the Deeprealms. Aside from their wolfskin instincts and tastes, she and Keaton have little in common behavior-wise with each other, which Keaton seems to notice. But as shown in her battle quote in Anna on the Run she inherited her father's cannibalistic attitude towards her enemies.

When acting her normal self she is often lazy, strange and distant from others, but her emotions fluctuate a little and she has a bit of a wicked tongue regardless of her current mood. She is very quiet and often seems uninterested and lazy to most people. However, she can easily and quickly change for better (when she finds "treasure" or is around her parents) or for worse (when refused "treasure" or is thinking about her parents with a negative headspace). This effects her interactions with people as the exchange she has with Siegbert demonstrates the kind of self-deprecation, aloofness and suddenly refined speech that the stereotypical proud, sociable closet country mouse would have when in her normal or happy state-of-mind, but can tend to talk in an extreme and rushed matter of speaking when angered, annoyed or extremely excited. According to her supports with Nina, it also applies to her facial expressions as she does not express herself on command and as a result she is often hard to read most of the time, however she is still capable of wagging her tail whenever she is happy or excited.

Similar to her father, Velouria has the habit of picking up random objects that she comes across and treasuring the ones that appeal to her. However, unlike her father, she will turn cold to anyone who refuses to give her a "treasure" that she wants. On rare occasions, she will attack said person for what she wants. She will sometimes also "collect" small but ferocious animals, such as ferrets with rabies, and sees no value in gold or jewelry whatsoever, save for any wedding rings she is offered in her S-Supports. She will also eat whatever food she finds on the ground whether its fresh or less than a fortnight old, despite protests from the rest of the army, as a result of being half wolf.

She loves to play with fur balls and often invades people's personal spaces to sniff their scents. Due to being a wolfskin, she can track down or sense people with their scent alone which is helpful for her when tracking down "treasure" or her parents. She particularly likes the scent of her mother and says that she smells "more like a flower everyday". She has the messiest room out of everyone in the army due to her habit of hoarding "treasure".

Her birthday is October 11.

*Velouria will receive whatever secondary class that the Avatar has access to if she has achieved an A+-Support with her.

*Velouria will receive whatever secondary class that the Avatar has access to if she has achieved an S-Support with him.

Velour is a type of fabric, which is the likely the origin of both her Japanese and English names, keeping the naming pattern of all beast shapeshifters in the series.

In Georgian, "velouri" means savage and the "a" suffix would translate "Velouria" as "he/she is savage", which would be fitting with the wolf-skin.

Velouria as a Wolfskin by Marue.

Artwork of Velouria with Selkie.

Artwork of Velouria as a Wolfskin in Fire Emblem 0 (Cipher).

Velouria as a Wolfskin in Fire Emblem 0 (Cipher).

Velouria as a Wolfssegner in Fire Emblem 0 (Cipher). 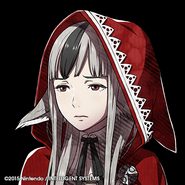 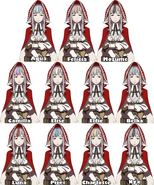 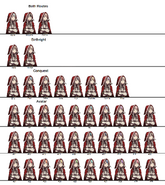