The Venin Axe (毒のおの Doku no ono, lit. Poison Axe) is an Axe that appears across the Fire Emblem Series. Like its name suggests, this axe inflicts the Poison condition on its target upon impact. Primarily wielded exclusively by enemy Bandits or Fighters, it is generally unobtainable through legitimate means. Exceptions to this rule exist, however; in Path of Radiance, it is possible to steal two, one from an enemy Warrior in Chapter 22 and another from an enemy Berserker in Chapter 24. Also, in Radiant Dawn, it is possible to steal these axes, provided that the relevant conditions are fulfilled.

Official artwork of the Poison Axe from the TCG.

The Poison Axe, as it appears in the fourth series of the TCG.

An enemy Fighter wielding the Venin Axe in Path of Radiance. 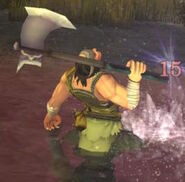