Teleportation
[view]
The Vestal (ウェスタ Vesta) is a combat magical class that is introduced in Fire Emblem Echoes: Shadows of Valentia. Said to be priestesses sacrificed to the dark god during ancient times, similar to the Witch class they wield Black and White magic as their primary weapons of choice and have the ability to teleport from one point to another in any given skirmish.

The name Vestal and Vesta may stem from Vesta, the Roman goddess of the hearth. 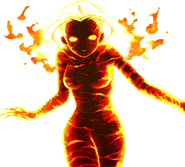 Generic class portrait of a Vestal from Echoes: Shadows of Valentia.