View source
watch 32:38
'Fire Emblem' - The Sacred Stones - Chapter 6
Do you like this video?
Play Sound 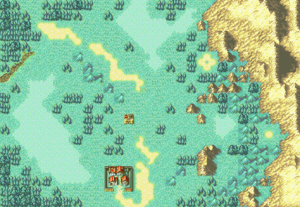 Chapter script
[view]
“Eirika suppresses her feelings of unease and continues to search for her brother. Passing through Serafew, the group crosses into the Grado Empire. From here forward, there is no doubt that they are walking through hostile territory. In hopes of avoiding unnecessary trouble, Eirika and company head for a sparsely populated region of Grado. However, it is too late. Their movements are already being tracked.”
—Opening Narration

Victims of War is Chapter 6 of Fire Emblem: The Sacred Stones. This is also the first map that is covered by fog, making the battle tougher. After you beat this chapter, you will get an Orion's Bolt, a promotional item for Archers, if you saved all the citizens from the Bael.

Novala is located at where the cross-like shape is, the one with the brown parts forming a cross and with a green dot at the middle, also surrounded by forests.

For those who wish to obtain the Orion's Bolt at the end of the chapter, which means that all three villagers must stay alive, bringing Vanessa is almost a must (Just position seth in the closest position and rush him over. None of the enemies are a threat to him, and he can go over the hills and rescue the green units back so he is the only one in range of the spider). While it is possible to try and rush to the boss before the Bael can reach the villagers, as the chapter objective is a Defeat Boss and not a Rout, being able to move quickly enough to get to Novala may prove challenging.

Because the Bael can only move one space per turn while on the mountain, so long as Vanessa blocks its path, the villagers will be safe. Carrying vulneraries and an antitoxin (which can also be acquired from the village) will be helpful, especially if Vanessa isn't well-trained. A Slim Lance will also improve her chances of dodging (and, if she's strong enough, landing hits on the Bael). So long as the Bael cannot reach the villagers, they are safe; no other enemy is in range of them unless you move them yourself.

Because this map has a Fog of War, it will be useful to have some torches and torch staves (which can be bought from the Serafew world map shop before you start the chapter; torch staves do not appear in the Chapter 5 Shop). Natasha and Moulder will especially profit from repeatedly firing off torch staves for EXP and Staff rank experience. Colm, as a Thief, has an innate wider range of view than other characters, so he can be used on the Formation screen to get a view of the immediate surrounding area even if you won't deploy him in battle.

The rest of the party may wish to split into two groups. The first group is a fast, mobile group that stays closer to the northwest to deal with the two Cavaliers and the Troubador, which can also sweep back down and take care of the Cavalier reinforcements (if you're playing on Hard mode). The second group has a sturdy vanguard with heavy-hitters or damage chippers behind them to deal with the bulk of the enemy group. It will be useful to situate someone with good Defense or good avoid (preferably both) in the fort as soon as possible. However, beware of using Franz or Seth, as one of the axe users to the north of the fort has a Halberd that can possibly kill them or put them at risk of dying. Furthermore, because of the wide array of physical attackers in that area, it is likely that any physical attacker placed on the fort will be at risk of weapon triangle disadvantage at some point in the enemy phase.

Novala does not move, so it may be useful to have units attack him from two-range, since the healers can then stay out of Novala's attack range. Because he is situated on a plains tile while surrounded by forests, it will be easy to attack him and evade his attacks. The only one who will probably have shakier hit rates will be Lute, due to the Weapon Triangle.

Should the player want to complete this chapter before the Bael even arrives, fielding Vanessa with the Torch obtained last chapter, as well as Moulder (or Natasha, should she have C-rank staves) with a Torch staff can make this chapter easier. Have the healer start at the closest spot to the mountains, and use the torch staff at the furthest distance every turn. Send a mounted unit (preferably Seth due to his higher movement as he is a Paladin) with a sword (due to the Halberd enemy located 2 squares right of the mountain) and have them defeat the Cavaliers at the top of the map. Then keep moving them to their max movement, and have Vanessa behind them. On turn 4, have Vanessa use a Torch and move her whole movement range (have her use it, then use Canto movement, so that you do not move her onto a unit by mistake and end her turn before she can use the Torch). Then have the mounted unit kill Novala, and end the chapter.

After you finish this mission and unlock the Tower of Valni, three different monsters will attack this location: