Berserker
[view]
“Nuffin' make sense 'ere, mate, so don't try to suss it out. Like, 'ow'd we get 'ere, like? And 'ow'd we get such trig 'aircuts? You just gots to roll wif it.”
—Victor with Vincent in The Golden Gaffe.

Victor (ハンサム Hansamu, Handsome in the Japanese version) is an enemy boss character and a Bandit Twin from Fire Emblem Awakening, his older twin being Vincent.

If the player has completed Paralogue 2 before Paralogue 4, Vincent and Victor arrive near a village on The Twins' Turf in the northern part of Ylisse. Victor tells Vincent that it is his turn to ransack a village and Vincent agrees and promptly leaves him to his pillaging. However, Victor is killed by the Shepherds and Anna. Later, grieving for his brother's death, Vincent kidnaps and plans to sell another Anna to the slave trade to fund a grave for Victor, however Vincent is killed by the Shepherds.

If Paralogue 4 is beaten before Paralogue 2, after Vincent's death by the hand of Anna and the Shepherds, Victor finds another Anna protecting a small village on their turf. Victor plans to kill this Anna and ransack the village to fund the construction of his brother's grave. However in the end, Victor is killed by the Shepherds.

Victor along with his brother also appear in two DLC chapters. In the The Golden Gaffe, a group of Risen steals Vincent's large supply of gold. The two decide on what to do, and Vincent says that he will try to reclaim the gold stolen from him. However, the group of Risen also stole some gold from Chrom and his Shepherds, so they arrive at the mansion also. The two brothers believe that Chrom will ruin their plans at stealing the gold and run away. After the remaining Risen are killed/escape from the mansion, Vincent goes back and finds that the Shepherds have cut the Risen down and took off with all their gold. Victor tells him that since the Risen are undead, more should arrive soon and they could "cut" those down to reclaim the lost gold.

In the Harvest Scramble, the twins are a part of a harvest festival committee and both help to run the festival until an army of Risen attack the festival. Both twins flee from the scene, leaving Chrom and his army to deal with the Risen. 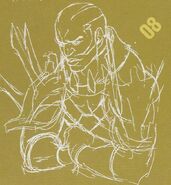 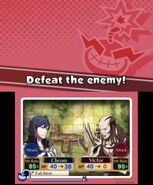 Chrom and Victor in warioware gold