General
[view]
“You would ask Renais to rescue us from...a natural disaster?”
—Vigarde to Lyon in a flashback in The Sacred Stones.

Vigarde is an antagonist in Fire Emblem: The Sacred Stones. He is known as the stalwart Silent Emperor (穏健帝, Onken Mikado lit. Moderate Emperor), and is the monarch of the Grado Empire.

Before the events of The Sacred Stones, Vigarde was a wise and kindhearted ruler, whose camaraderie with King Fado of Renais started a lasting friendship between the two nations. During the course of the game, Vigarde seems to have ordered the invasion of Renais, and thus sent the neighboring nation into ruin.

One year before the events of the game, Emperor Vigarde died due to a lasting sickness. His death drove his son, Prince Lyon, into despair. By manipulating the Sacred Stone of Grado, also known as the Fire Emblem, which housed the spirit of the Demon King Fomortiis, Lyon managed to bring his father's corpse back to life, but only as a mindless puppet of what it originally used to be. Prince Lyon, now consumed by Fomortiis's spirit, used his father's puppet corpse to orchestrate the destruction of the Sacred Stones.

Characters including Generals Glen, Duessel, and Selena noticed the Emperor's change in temperament, but were unable to discern what the root of his change is. Not knowing what caused the change eventually led Duessel to join Ephraim's group, while Selena stayed completely loyal to her death. Glen could not follow the orders that he was given (to find and kill Eirika), which led to his defiance of the emperor. However, Valter quickly found out about this and killed Glen in the mountains of Carcino.

Vigarde's manipulated corpse was eventually fought and killed by Ephraim's group in Chapter 14 Father and Son. The body then disappeared without a trace.

Ephraim's Reginleif, however, is generally accurate enough to hit Vigarde with decent reliability. A reasonably leveled Ephraim should be able to defeat Vigarde on his own, assuming that the player positions Ephraim by Vigarde, waits for Vigarde to attack, and heals Ephraim as necessary.

If the player's Reginleif is broken, arming Duessel with a hammer could be a decent last resort alternative.

Ephraim: Vigarde! Why did you invade Renais? Why did you kill my father?
Vigarde: ......
Ephraim: Answer me, Vigarde! ...So you really have lost hold of your senses, haven't you?

'Vigarde' probably derives from the word 'Vígríðr', which, in Norse mythology, is the field on which the battles of Ragnarök will take place.

Vigarde's Portrait in The Sacred Stones

Vigarde's battle sprite in The Sacred Stones attacking with a Lance.

Vigarde performing a critical hit in The Sacred Stones with a Lance.

Vigarde's battle sprite in The Sacred Stones attacking with an Axe.

Vigarde performing a critical hit in The Sacred Stones with an Axe.

Vigarde's battle sprite in The Sacred Stones attacking with a Hand Axe.

Vigarde performing a critical hit in The Sacred Stones with a Hand Axe. 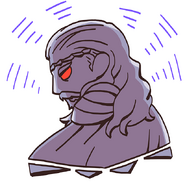 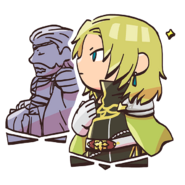