Amber Lee Connors
[view]
“So, are we gonna help them, or should we just stand here all day and twiddle our thumbs?”
—Vika

Vika is a playable character from Fire Emblem: Radiant Dawn. Formerly serving as a laguz slave, she is a member of the Laguz Emancipation Army, alongside Tormod and Muarim. Vika is among the first of the laguz to sense that Micaiah is a Branded. This involves her feeling an odd sensation of discomfort when Micaiah is near her, whereupon she will be urged to rise and flee.

Vika joins the Dawn Brigade in 1-7, where she is a competent combat unit. While she doesn't one-round, she double attacks all enemies and can dodge attacks well, with reasonable durability to boot. However, her combat pales in comparison to Muarim, Nailah, or the Black Knight, who are all acquired around the same time. Her flying could potentially be useful in 1-E, but it would realistically require her to use a Laguz Stone, which might not be worth it. When she rejoins in 4-4, Vika will be severly underleveled and suffer from her poor strength, as well as suspect durability. While her growth rates are good, they aren't nearly enough to offset her bad stats. She also misses the biggest oppurtunity to get experience in 4-1, and she can't equip Paragon for 4-4; her level will also be far too low to use a Satori Sign. All of these problems combined make her one of the worst units to bring into the Tower of Guidance.

Sea-Dark Wing
A warrior of the raven clan and member of the Laguz Emancipation Army. Dressed as a pirate, she adds some extra life to the festival. Appears in Fire Emblem: Radiant Dawn.

Vika became a liaison to former slaves, traveling between the cathedral and laguz district—and was loved in both.

Vika is illustrated in the trading card game Fire Emblem Cipher with the following cards: 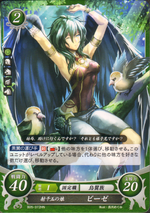 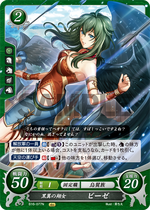 Vika is a feminine name of Scottish origin that means "from the creek".