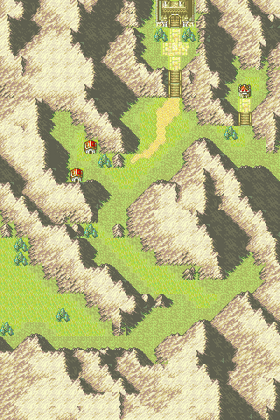 Chapter script
[view]
“No... Those things come from Darkling Woods. It's been a long time since they've wandered this far afield. It's as the elder says... Evil omens take many shapes.”
—Saleh before the battle

Village of Silence is Chapter 12 of Fire Emblem: The Sacred Stones on Eirika's Route. The chapter's enemies are all monsters. This chapter you get Ewan, a Pupil (your last Trainee if you recruited Amelia on the first go). You also get Saleh, a Sage. The houses act like villages. Visiting the southern house recruits Ewan, while the northern contains a Barrier Staff.

In case you did not recruit Ewan during the chapter, he will automatically be recruited at the end of the chapter if either Saleh or Tethys are alive.

When approaching the boss, 5 Gargoyles at the north-west, three lv 9, two lv 10.

This level introduces many new monsters, including Gargoyles, Mauthe Doogs, and Baels if you did not fight the one in Chapter 6. One way to do this is to slowly creep along with heavy units like Gilliam leading, and archers and Saleh behind. It is possible to get Ewan early, if you send up a strong flier to the house. Kill a few monsters around it, get Ewan out, and rescue him.

There is a method to have Ewan reach level 10 during this chapter very safely. It is recommended that you bring Tethys with you to speed up the process. There are two notable monsters on this map: the boss, and an Entombed near the shop in the upper right corner of the map. Both of these enemies do not move and provide excellent experience. Once you have cleared every monster from the map aside from these two, bring Ewan to the Entombed and defeat it. Ewan should reach Level 5 by defeating the Entombed alone. After that, give Ewan a Thunder tome and proceed to the boss. On Hard difficulty, the boss will have 12 resistance; in the likely situation that Ewan did not gain magic every time he leveled up fighting the Entombed, Ewan will deal 0 damage to the boss. Through the use of Tethys or rescuing, you can continuously move Ewan out of the boss' range while attacking it from afar with a Fire tome. After enough turns, Ewan's Anima rank will raise, at this point use the Energy Ring Ewan has upon being recruited, and he will be able to damage the boss with the Thunder tome. Ewan will gain enough experience fighting the boss to reach Level 10.