The Villager (むらびと or 村人, Murabito) is a combat physical class that is introduced in Fire Emblem Gaiden. A trainee class that affords little value apart from possessing much potential to grow into valuable assets of the player's army, Villagers primarily wield either Swords or Lances as their weapons of choice.

In Gaiden, Villagers wield Swords as their weapon of choice. They are regarded as a "zero-tier" class in this title, given that they are able to promote into a variety of first-tier classes, including the Mercenary, Soldier, Archer, Mage and Cavalier classes. Characters of this class promote into any one of these classes when they visit any appropriate shrine upon reaching Level 3, although the class that they promote into is chosen randomly.

Although weak as a class, Villagers have the potential of levelling up infinitely by following the Mercenary path, as the corresponding third-tier class, Dread Fighter, is able to promote back into this class any time after reaching Level 10.

The Villager class returns in Awakening, this time wielding Lances in a manner that is similar to the Recruit class. They cannot promote this time, but they can reach up to Level 30, although their stat caps are extremely low. Donnel, the playable villager, can use a Second Seal to switch into either the Mercenary or Fighter class lines, giving him three promotion options: Hero, Bow Knight, and Warrior.

In Fates, the class wields Lances as its sole weapon of choice, much like its incarnation in Awakening. The Villager is a fully-fleshed class instead of a trainee-tier one, given that it can directly promote into either the Merchant or the Master of Arms class. 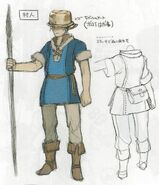 Concept artwork of the Villager class from Awakening.

Generic portrait of the Villager class from Awakening.

Generic portrait of the female Villager class from Fates.

Battle model of the Villager class from Gaiden.

Donnel as a Villager in Awakening.
Villager FE2 Map Icon.png
Map sprite of the Villager class from Gaiden.