Duke of Roseanne
Member of the Shepherds

Chapter 3: The Next Generation (TMS♯FE)

Jamieson Price
[view]
“Ha! Is the lady intrigued? Of course you are--it's only natural. I am myth and legend! I am he who strides large across history's greatest stage! The man who puts the 'arch' in 'archer'!”
—Virion to Sully in Chapter 1

Virion is a playable character from Fire Emblem Awakening.

In Fire Emblem Heroes, his artwork is illustrated by Wada Sachiko.

Virion is the former duke of Rosanne, a fallen country in Valm. In his support with Panne, it is revealed that he fled Rosanne because he believed otherwise the people would've died for him defending against Walhart.

Virion is introduced and recruited in Chapter 1. When Sully enters the field, Virion appears and immediately tries to court her with little success. He joins the army and also explains to Robin how to use bow-using units properly. Two years after defeating Gangrel, Walhart, Conqueror of Valm, begins an invasion of the Continent Ylisse. Virion and one of his retainers, Cherche, leave Valm and heads east to Ylisse to seek aid from Chrom and Ferox after revealing his true identity.

After the battle against Grima, Virion returns home where he is branded a coward and a traitor by the citizens of Rosanne. Through his hard work to restore his country and the assistance of his wife, if he has one, he regains the trust of his people.

Virion appears in game as the Mirage partner of Eleonora Yumizuru. He transforms into a bow to aid her in battle. However, his aristocratic attitude leads him to commonly butt heads with Eleonora, as well. He desires to see Eleonora become a refined young woman of class, often either ignoring or refusing to acknowledge that she does not share that desire and wants to be a Hollywood actress.

Virion is somewhat detached from the world. While he acts friendly, his words and actions leave his grace and refinement somewhat unclear. Although coming off as a coward, he can actually be quite noble at times, as is the case in a multitude of his supports. That nobility also reflects his caring nature towards other people, as his support with Cherche reveals that he took the downfall of his country the hardest out of anyone. Because of this, Cherche forces him to promise her that when times get tough, he will not give up or feel down because of it.

Though people in the army think of him as just a boaster, most of his statements seem to be accurate, as he goes to show in his supports, revealing for instance that he is a very talented dancer with even Olivia herself stating that he is better than her; although this could simply be Olivia's modesty at work. He also seems to be resistant to Tharja's attempts to hex him into doing her bidding, and although he follows her orders, it is later revealed that it had no effect on Virion, and he was obeying out of his own free will. In fact, in his S-Support with Tharja, he reveals that the reason he followed her commands was because he saw the good will behind her orders.

Possessing quite the intellect, his conversations with certain characters normally revolve around pointing out and elaborating on his interlocutor's problems before they can even answer, while showing a talent for political intrigue in his supports with Lissa and Frederick, being able to read people in his supports with Miriel and Cordelia and a knack for strategy in his supports with Robin, proving his abilities match his position. However, he can be quite ruthless when it comes to combat, as the only reason he kept beating Robin was because he was willing to sacrifice his troops in order to achieve victory, whereas Robin was reluctant to sacrifice so much as a single person.

He is a shameless flirt—but one who becomes offended if someone suggests he has more lecherous intentions. There are instances where he can get quite flustered, however, as his failure to properly identify Libra's gender causes him to question the assertive confidence with which he approaches ladies. Nevertheless, Virion spends a lot of time attempting to woo women and is willing to do anything for them. He spends more time at the mirror than anyone else in the army.

Virion has the makings of the Gordin archetype stat wise. As such, his most notable trait is how quickly his skill grows; he has a 70% growth rate, which will let him cap that quickly and provide excellent critical sniping skills. His speed also grows very quickly as well, allowing him to double attack earlier than most units. However, true to his unit type, his defense growths are not very high, which can offset his fast-growing HP and make him a bit more fragile than expected. However, Virion can still function very well as a bow user, especially with the Killer Bow due to his terrifying skill.

Virion performs well in his two promotions Sniper and Bow Knight. As a Sniper Virion can continue to shine as the main Archer of the game and can continue to use long-ranged bows. Regardless of which of the two Virion remains, Bowfaire provides an excellent strength boost to Virion's modest strength growth. Accuracy +20 also is a noteworthy skill to ensure that he hits his target, but this should not be too much of a problem given his Skill and Luck. As a Bow Knight, Virion gains a slightly better strength growth on top of the ability to use a close ranged weapon, Swords. Bowbreaker is Virion's go to skill in this class, allowing him to be an anti-bow unit—mostly, this is noteworthy for patching Virion's bow weakness if he reclasses to a Wyvern Lord. All in all, Virion is a great archer fit for any team.

Virion's two reclassing options are the Wyvern Rider and Mage class trees. Virion as a mage won't have an advantage over the 2 possible magic users when it comes to the magic stat, but can still serve as a decent magic user at best with a 50% magic growth after reclassing him; his only real advantage having more skill and speed than either of them. Few skills in the Mage skill tree are of use to Virion unless the player is attempting to convert him into a magical unit, though without a great deal of training or boosts from Spirit Dust he is unlikely to be particularly effective in such a role. Perhaps the most tempting option for Virion to spend some time in is the Dark Knight class, which can give him Lifetaker to help with his meager defenses, the only healing skill he has access to. Slow Burn, though largely a situational skill, can be of use in longer engagements, and can also be combined with the Wyvern Lord's Quick Burn skill to provide for a constant hit/dodge boost until after turn 15.

In the Wyvern Rider line, Strength +2 can give a small, but useful boost to his offense; although, All Stats +2 from the DLC would be a better alternative, if it's available to you. As a Griffon Rider, Virion can acquire Lancebreaker, which helps alleviate his weakness to Beastkillers if he stays in the Bow Knight, Dark Knight or Griffon Rider classes. Deliverer can be made of use when paired up to move across the map quicker. The Swordbreaker skill from the Wyvern Lord class is not as useful to him as Lancebreaker, unless he wishes to remain in one of the axe-specializing classes like the Griffon Rider. Overall, Virion's best use is probably in the Bow Knight or Dark Knight classes, which take advantage of his access to Lancebreaker, Deliverer, and Tomefaire or Bowfaire for the greatest combination of mobility and offense. It's unfortunate that Virion lacks any damage-dealing skills like Luna or Astra, which hurts his offensive potential and makes him less attractive as a postgame Sniper, though he still serves very well in the role during the events of the main game, being the only unit with access to the class from his starting role.

Elite Archer
Rightful ruler of Rosanne in Valm who has a tendency for wit and puffery. Appears in Fire Emblem Awakening

Originally when playing Fire Emblem Heroes for the first time, a two-star Virion was the first hero summoned by Kiran. This was the only scripted summoning in the game and was meant to fill out the initial battle roster alongside Alfonse, Sharena, and Anna. He has since been replaced with a four-star Takumi.

Virion - Archest Archer
Virion returned home to Rosanne, where he was labeled a traitor and a coward, or else ignored entirely. He never battled these claims, but history shows he gave the rest of his life to the people.

Virion and the Robin
Many wrote of Robin's legendary exploits, but accounts of her origins and character varied. Scholars, poets, and bards agreed on one thing alone--she loved her husband, Virion, above all else.

Virion and Cherche
Virion returned home to Rosanne, where he was labeled a traitor and a coward, or else ignored entirely. But Cherche's smarts and kindness eventually brought her husband back into good standing.

Virion and Cordelia
Virion returned home to Rosanne where he was labelled a traitor and a coward, or else ignored entirely. But Cordelia defended her husband vehemently and ultimately won him a second chance with his people.

Virion and Lissa
Virion returned home to Rosanne, where he was labeled a traitor and a coward, or else ignored entirely. But none of it fazed his wife, Lissa, who won the populace over with good old-fashioned charm.

Virion and Maribelle
Virion returned home to Rosanne, where he was labeled a traitor and a coward, or else ignored entirely. But his wife, Maribelle, treated the people fairly and equally, and in time, they learned to forgive him.

Virion and Miriel
Virion returned home to Rosanne, where he was labeled a traitor and a coward, or else ignored entirely. But Miriel's discoveries improved their quality of life, and they soon came to love him once more.

Virion and Nowi
Virion returned home to Rosanne where he was labeled a traitor and a coward, or else ignored entirely. Thankfully, his wife Nowi's flair for drama was entertaining enough to keep the mob's pitchforks at bay.

Virion and Olivia
Virion returned home to Rosanne, where he was labeled a traitor and a coward, or else ignored entirely. Over time, however, Olivia's dancing managed to bring him back into the populace's favor.

Virion and Panne
Virion returned home to Rosanne, where he was labeled a traitor and a coward, or else ignored entirely. But his wife Panne's dedication did much to bring him back into good standing among his people.

Virion and Sully
Virion returned home to Rosanne, where he was labeled a traitor and a coward, or else ignored entirely. But in time he was forgiven, largely thanks to the bold (and slightly terrifying) nature of his wife, Sully.

Virion and Tharja
Virion returned home to Rosanne, where he was labeled a traitor and a coward, or else ignored entirely. But a few well-placed hexes from his wife, Tharja, eventually brought the populace to their senses.

Virion is illustrated in the trading card game with the following cards: 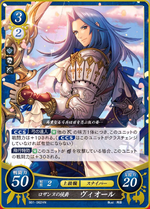 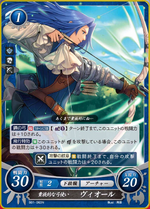 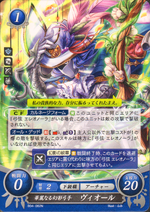 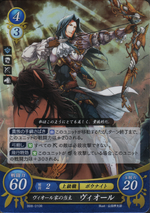 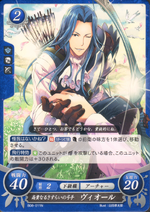 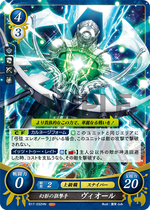 Virion's name may have been derived from the Latin word viri, which can translate as man or hero. It is also another term for a virus particle.

Another possible origin is Viaur, the name of a 168 kilometer long river from the south-western France on Avyeyron River, located in southern Massif Central and north of Millau.