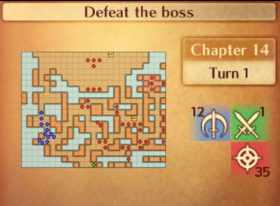 Leo (Automatic from start)
Keaton (NPC, speak with Corrin)
Kumagera (must be captured)

Chapter script
[view]
“Corrin is filled with doubt after witnessing the brutality in Cheve. Before Corrin can share those doubts with King Garon, the Hoshidan army appears in Nestra.”
—Opening Narration

Voice of Paradise (楽園の歌声 Rakuen no utagoe lit. A Heavenly Singing Voice in the Japanese version) is Chapter 14 of Fire Emblem Fates in the Conquest route. This chapter takes place in the Opera House.

The player starts on the west side while a mass of enemy units protect Kumagera in the east. Keaton is a Wolfskin NPC who appears on the map at the start of the turn, and he will automatically head for Corrin. Once he reaches them, he will start the dialogue which ends with his recruitment (you can also speak to him for the same effect).

Clear out the enemies carefully, especially on Lunatic Mode, there are several Shrine Maidens scattered around the area with various staves, including a Hexing Rod. As you reach Kumagera, reinforcements will appear which depend on the difficulty (see reinforcements section).

Regardless, take out Kumagera quickly. On Hard and Lunatic Modes, the Shrine Maiden next to him will also have an Entrap stave, locking the unfortunate unit into a death trap unless they have Pass, since fliers will be destroyed by the Archers next to him. Kumagera has relatively high strength, so have Niles prepared and his stats boosted while weakening Kumagera enough for him to be captured.

An easy way to circumvent the Entrap staff is to bring a powerful, high-mobility unit to just outside maximum range, then charging in (with Azura's help via singing). Kumagera is stationary so it's possible to eliminate the Shrine Maiden without him attacking.

After the chapter is completed, Corrin's Yato will be upgraded to the Grim Yato, increasing its stats and granting a +2 bonus to Defense and Resistance as long as Corrin has the weapon in their inventory.