Kellen Goff
[view]
“You there, in the bushes. You have until the count of five to show yourself before I start throwing sharp objects. One...two...four...”
—Volke, in a C support conversation with Bastian

Volke introduces himself as an informant throughout the events of the game, witholding a report from Greil until he is paid for it, demanding of Ike 50,000 gold, while informing he be reached by going to a bar and asking for a "fireman". After he is paid the amount, he reveals that while the report was a hoax and the money was a way to see how resourceful and responsible he was, he had a secret to tell that was too great to be written down: He revealed that he was hired by Greil to kill him in case he ever went berserk again and revealing his secret to Ike when he became mature enough to hear it, as the medallion was responsible for his wife's death. He initially turned Greil down, recognizing it was impossible for him to accomplish the task, however, once he crippled himself, he took the job, as he had become someone his skill could handle. Afterwards, Ike pays him from the 50,000 to renew Greil's contract with Ike. (But in the sequel, Radiant Dawn, he pays Ike back 20,000 of his 50,000 gold upon encountering him.) Upon hiring Volke (upon the second time the two options: Hire or Don't Hire) for renewing Greil's contract to Ike, if the player chooses "Hire", Volke automatically Class changes into an assassin, as he reveals his true profession.

Volke appears late in the events of the game, hired by Bastian to capture Izuka. You can recruit him with Bastian or Elincia, by paying him a certain amount of gold. Most of it can be reclaimed in his Info Conversation on the next chapter. As in the end of Path of Radiance, he is an assassin. In his battle conversation with Izuka, it is revealed Volke once worked for him. He also shows some slight modesty and humility when he flusters after Ike thanks him for his services. He is, unlike in the previous game, not an important part of the overall plot.

An assassin who has worked for multiple people, Volke demands gold for whatever job he takes on, regardless of how large or small, though he refuses to tell his reasons for amassing so much gold, going so far as to demand an exorbitant amount of it for the answer, when asked by Elincia. Willing to take any job no matter how "dirty" it is, once he takes a mission, he devotes himself to completing it, regardless of how long it would take, though he only takes one job at a time, as shown in his support conversation with Bastian and attack conversation with Izuka in Radiant Dawn. However, he does seem to hold some morals, as he seems to have a grudge against Izuka, as he openly stated his dislike to Bastian, and even charges only 3000 Gold for his services as a personal discount to kill Izuka.

A secretive and somewhat amoral character, and with a grand total of one support not much is known about him, save that he shows no open hostility towards the laguz. He does not seem to have many visible loyalties, seeing as he will do anything and everything for money, even if it involves switching sides immediately after a contract is completed. Seeing his possible bond support in the game, it is implied that Bastian is the only person he trusts - or at least respects enough to converse with.

However, he does show some modesty after Ike thanks him for working for him, although that could be just because Volke is not used to being thanked. He also claims to be uneasy in crowded places, preferring to be alone and in hiding, even demanding Ike to pay him when asked to show up to dinner with the group.

Beyond Bastian, Volke shows little affinity for any one. Ike and Geoffrey are two possible exceptions, as they are the only characters that he purposefully seeks out in either game. In Part 4 of "Radiant Dawn" Geoffrey comments that he has told Volke before not to sneak up on him, showing that this is not an uncommon occurrence.

Volke: My...apologies... It appears I can no longer accompany you. When my payment is ready, contact me. You know how to reach me, do you not?

In Path of Radiance, Volke charges 50 gold per pick (which isn't bad as gold is abundant in this game). His combat is decent at best even when trained as knives are very weak so he should rarely see combat. He joins earlier than your other possible thief, Sothe, has higher base stats and can promote, while bonus experience makes it easy for him to stay fast enough to steal most important items (especially physic staffs, which can make some later hard mode chapters a lot easier) from enemies, without seeing much combat. Thus, he usually is considered as the more viable thief in the game.

In Radiant Dawn, Volke joins near endgame with many different buffs to enjoy. Knives were buffed from the previous game, and with the introduction of Baselard, Volke now has a great weapon to utilize. Furthermore, he has great base stats and two good skills in Critical +25 and Lethality which make him able to consistently kill enemies in one round. In all, while many units are competing for a spot in the endgame, Volke is there to fulfill his contract if the player wishes to do so as a filler combat unit.

Man of Mysteries
A man who makes his living as part of the criminal underworld, answering to no one. Also occasionally referred to as "fireman." Appears in Fire Emblem: Path of Radiance.

Bastian recruit
Bastian: Ah, my partner in crime. How shall I convince you to move those leaden feet of yours into action? How much "convincing" will it cost?
Volke: Three thousand.
Bastian: I thought I was the jester. Considering your usual schedule of services, three thousand is negligible!
Volke: I don't like that guy. Call it a personal discount. Do you want it or not?
Bastian: Of course I shall take your discount! Do as you wish when you see him. Now get to work.
Volke: Understood.
Bastian: I almost pity old Izuka...


Elincia recruit
Elincia: Excuse me... Volke?
Volke: ...
Elincia: Um... Sir Fireman?
Volke: ...What is it?
Elincia: You seem to have some time on your hands... Would you mind helping us?
Volke: Three thousand.
Elincia: Three thousand?
Volke: ...That's what the job will cost you in gold.
Elincia: Fine. I shall pay you that amount after the battle.
Volke: Agreed. I await your order.
Elincia: Thank you. And, if I may ask...
Volke: What?
Elincia: Why do you need so much money?
Volke: One hundred thousand.
Elincia: Excuse me?
Volke: That's what it will cost you for me to answer that question. Are you prepared to pay?
Elincia: ...No.
Volke: Then let's get to work. What shall I do first?

“...Stupid. I wouldn't be caught dead on a worthless battlefield like this. Sorry, but this is as far as I go...”
—Volke's death quote in Radiant Dawn.

Man of Many Mysteries

After finishing his contract, Volke went back to the shadows he knew so well. He was a man of mystery to the end.

Volke is illustrated in the trading card game Fire Emblem Cipher with the following cards: 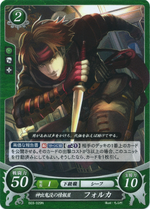 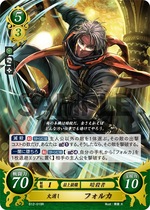 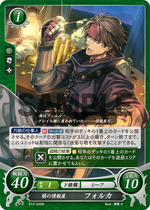 'Volke' is a mis-romanization of his japanese name 'Volker', which is a german name meaning 'Defender of the people' or 'The peoples guard'. It consists of the two german words 'Volk' meaning 'people', and 'Her' meaning 'army'. The name is most likely a reference to the deal he has with Greil, and later Ike, essentially protecting the people form the two should one of them go berserk because of Lehran's Medalion . Incidentally Volke keeps his Japanese name in the german versions of Path of Radiance and Radiant Dawn.