Wolf
[view]
“...Hey. You ever wonder what would happen if I just ate everyone we fought? Would the rest keep fighting?”
—Volug (translated from Ancient Language)

Volug is a character from Fire Emblem: Radiant Dawn, and is Queen Nailah's retainer. He is a Wolf Laguz, hailing from the lost nation of Hatari.

Micaiah's party first encounters Volug when searching the desert for Prince Pelleas, alongside Queen Nailah and the heron Prince Rafiel. Nailah orders him to protect Micaiah, where he remains for the rest of the game, proving to be a valuable asset to the Dawn Brigade. As a result of the possible backlash that could arise from having a Laguz accompany the Dawn Brigade, Volug, utilizing the Wildheart skill, poses as a pet dog in his transformed state.

If Volug is placed in the same team as Nailah in Part 4, he will be able to initiate a Base Conversation with Ike. In this conversation, Volug promises to teach Ike the Ancient Language, in exchange for Ike teaching him the Tellius Language.

Volug usually holds his silence, and is very serious about accomplishing any tasks that he is set. He mainly speaks in the Ancient Language, and has, towards the end of the game, picked up a stuttering command of the Tellius language.

Volug is also shown to possess a sharp sense of humor, which can be seen on the battlefield when he is spoken to. An example of such an instance can be seen in his A-rank support conversation, where he comments: "You know how hard it is to be charming when you never say anything? You should try it. It's hard".

*This skill cannot be removed in Part 1.

Volug possesses the Wildheart skill, allowing him to Halfshift, therefore allowing him to remain in wolf form for prolonged periods of time. In Part 3 of the game, Volug will stay in normal form, but can Halfshift whenever he is in his untransformed state.

Volug is considered to be a highly competent unit, owing to his Earth affinity and solid base stats. This usefulness of his is rather limited, as his slow EXP gains and low growths in Strength, Defense and Resistance all serve to pull him down. Due to a translation mistake, people think this can be easily fixed in Parts 3 and 4, where he may remove the redundant Wildheart skill and gain EXP normally. Unfortunately, the Halfshift skill only allows him to merely raise his stats by 1.5x, as opposed to twice when he transforms normally, but does not alter EXP gains by battle.

Strangely, Volug was still in wolf form on the day he went home. When asked why, he only said, "It's more comfortable".

Volug returned to Hatari to tell of Nailah's hopes and the great war. He hoped to migrate the whole nation.

Volug is illustrated in the trading card game Fire Emblem Cipher with the following cards: 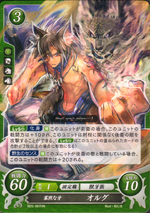 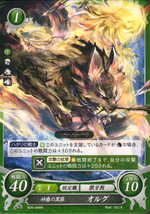 Volug as a Wolf in Fire Emblem 0 (Cipher).

Volug as a Wolf in Fire Emblem 0 (Cipher). 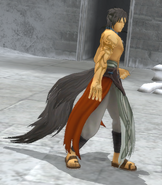