Chapter 19: The Final Battle (New Mystery of the Emblem)

Cavalier (Shadow Dragon and the Blade of Light)

Paladin (Mystery of the Emblem)

Matt Shipman
[view]
“As long as we're here, we won't let you get to Pales. If you don't want to die, run back to your country!”
—Vyland's boss quote in Fire Emblem: Mystery of the Emblem

Vyland is a playable character in the Archanea Series (with the exception of Fire Emblem: Mystery of the Emblem, where he is only a boss).

He is a member of the Aurelian Knights under Hardin. His starting class is Cavalier.

He is not recruitable in the original Mystery of the Emblem even if the player avoids killing him. However, in the remake, Roshea can convince Vyland to join Marth's army. In comparison to his fellow members, he handles Hardin's death the best and even maintains good relations with Altea.

Automatically recruited at the start of Chapter 5

Book 1: Automatically recruited at the start of Chapter 4

Note: Relevant to Book 1 only

In both the original Shadow Dragon and its remake as Book 1, Vyland is a very unimpressive unit - by far the worst of any of the game's cavaliers. He has very low stats overall, and his growths are some of the worst in the game, with his only standout being Weapon Level (compensated for handily by his base Weapon Level being terrible). The cavalier class's strong natural parameters mean that Vyland can at least function (barring Book 1's indoor maps), but he requires heavy investment and will likely not become good unless promoted early, something better spent on any of the other cavaliers.

Vyland's growths have been slightly buffed in Shadow Dragon, but this is his only real bright spot. He has some of the worst personal stats in the game, especially for his join time, and his main niche of being a cavalier is no longer unique. His growths remain very poor, meaning he will not improve much over his base performance. His lance rank of D is his only mild niche, as it allows him to use javelins to chip enemies at range and potentially use a Ridersbane eventually, but this is a niche filled by most of the other lance units in the game.

Vyland carries many of the traits of a late-joining unit in New Mystery: very low base stats, growths that, while high, fail to compensate for his bases, and a lackluster performance even on the lowest difficulty of his joining chapter. On any form of Hard difficulty, he becomes a near-liability, with his base Speed being so low that he can be doubled easily by many enemies - in fact, there are unpromoted units that boast similar or better Speed. He does boast a somewhat high B-rank in Swords, which can be turned into an A-rank if he is reclassed into Swordmaster, but this is the most he can manage.

Coyote's Justice
Member of the Coyote's Men of Aurelis. To him, Wolf, Sedgar, and Roshea are considered to be nothing less than brothers. Appears in Fire Emblem: Mystery of the Emblem.

He remained with the Aurelis Knights, and worked tirelessly to restore the nation.

Vyland remained a knight of Aurelis and helped rebuild. Always, he put the friends with whom he had grown to manhood first.

"Vyland returned to Aurelis after the war. He was finally able to discard his resentment towards Altea, and soon became their trusted ally."

Roshea: Vyland! Why are you here? The king told us not to interfere. Aha! Have you decided to join the Altean army like me?
Vyland: Roshea, I came to bring you back. Why have you turned to the Alteans? We are Coyote's subordinates. Open your eyes! You're being deceived!
Roshea: You're wrong, Vyland. The time I spent with the Alteans was short, but I know one thing for sure. It's not as Coyote says. They're not evil people.
Vyland: Roshea...
Roshea: Vyland, please. I don't want to fight all of you. Especially you, Vyland...
Vyland: ............ Well, Roshea... You were always the kindest out of us in the Coyote's Men.. You've always been able to tell which were the good guys, and which were the bad. I can't fight you, Roshea. If you, our brother-in-arms, are this sure, then I believe you. I am your ally from now on.
Roshea: Vyland...!

Vyland is illustrated in the trading card game Fire Emblem Cipher with the following cards: 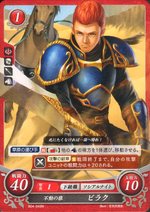 Vyland is a surname first found in Devon and Cornwall. "The dutchy manor of Moresk [in St. Clements, Cornwall] was given by Edward the Black Prince to Walter de Woodland, usher of the chamber, who died without male issue."

In Japanese materials, his name is romanized as Biraku. The name might be a corruption/mistranslation of one of the Slavic family names meaning wolf (as with other members of Coyote's Men); with potential matches being Vlk (vi-la-ku), Wilk and Biryuk.